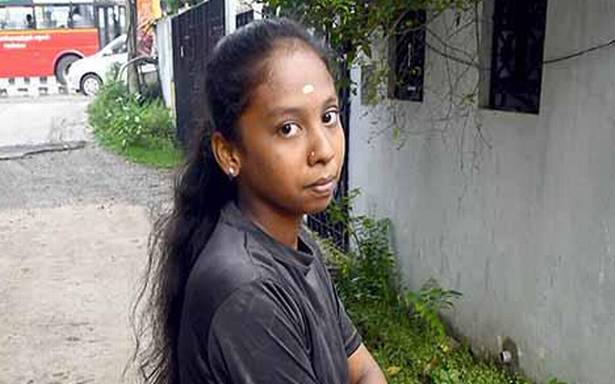 Her practice sessions with the kambu, kathi, eetti and theepandham run for four hours a day. And this is apart from the time S. Roshini spends for studies.

The 17-year-old resident of Kannagi Nagar has just returned from New Delhi with two gold medals in silambam at the Youth Games Federation of India.

She performed under the silambam single stick and silambam weapon categories and had to showcase her skills in twirling the stick and sword for a minute-and-a-half each.

The judges gave marks based on stance, speed, bhavala (the way she does it), face reaction and the stamina of the participant.

And despite time spent on practice, she excels in academics as well. “My school teachers and HM understand and sanction leave when I require for competitions. My mother, Maheshwari, has been encouraging me to do whatever I want. She works as a domestic help and has been managing to spend on my passion for eight years now,” said the Class XII student of Thoraipakkam Government Higher Secondary School, who has now begun coaching for boxing too.

However, leave from school and support at home are not enough for children from such difficult backgrounds. Her masters M. Ayyanar and M. Shankar said this year not many of their students were able to participate in the national level due to lack of sponsors. “The children are capable enough to go on to the international level, that too would require sponsorships. Unfortunately, nobody takes this traditional sport seriously. It keeps their body and minds fit and helps when it comes to sports quota seats in colleges,” said Mr. Shankar.

It would be great if Chief Minister M.K. Stalin can create a common fund for such purposes. “Without support from any government agency, we are forced to seek financial assistance to teach children the traditional martial arts of the Tamils,” they added.