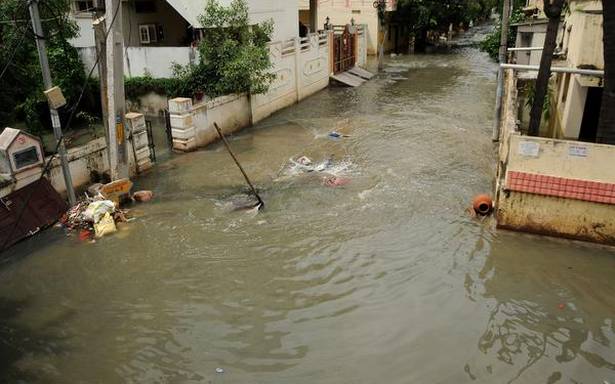 Several colonies towards the Eastern side of the city experienced flooding due to the heavy rain that lashed the city during evening hours on Thursday.

Akhilandeswari Nagar near Saheb Nagar, Mythili Nagar and Shivasai Nagar in Meerpet, and Kodandaram Nagar and Seesalabasthi downstream of Saroor Nagar lake, were a few locations hit by flood water yet again.

Three hours of heavy rain beat down the city relentlessly on Thursday, starting from 8 p.m., recording the highest rainfall of over 10 cm in Shaikpet. Kukatpally followed with 9.8 cm and Serilingampally with 9 cm. Saroornagar recorded 8.7 cm, Balanagar 8 cm, and Khairatabad 7.8 cm. Hayatnagar, and Bandlaguda were other locations which received about 7 cm of rain, which resulted in heavy flooding on roads and inundation of colonies.

Water streaming down the hilly areas of Krishna Nagar and Yusufguda made a spectacle, carrying away two wheelers and push carts along with the flow.

While at many locations water cleared eventually, there were colonies which remained besieged by flood water even on Friday. “This has become a routine for us whenever it rains. Floodwater rushes into our residential area, due to insufficiency of the stormwater drain capacity,” said Ch.Saibaba, a resident of Kodandaram Nagar, where knee-deep water entered homes in low-lying areas. Houses were locked, as residents shifted to safer locations in the dead of the night.

Rain water mixed with drainage has become a routine scourge for the residents of Akhilandeshwari Nagar in the vicinity of Kapra Lake. Due to newly proliferating colonies around the lake and absence of drainage lines, all the sewage is connected to the stormwater drains, which results in overflow during rains. “Drainage from areas such as Almasguda and B.N.Reddy Nagar enters the inlet channels of the lake. During heavy rain, the drains overflow and flood the colony. Owing to CC roads, the flood water settles in open plots, which results in chronic mosquito menace,” says Koteshwar Goud, a student.

In colonies around the chain-linked lake system of Pedda Cheruvu, Mantrala Cheruvu and Chandan Cheruvu in the limits of Meerpet Municipal corporation, vanished surplus weirs are the root cause of flooding.

With Chandan Cheruvu of Jillelaguda brimming to the brink, residents had to create a breach to let the water out, which resulted in heavy flooding of Shivasai Colony.

The situation is worse in Mythili Nagar, which falls between Mantrala Cheruvu and Chandan Cheruvu. A broken stormwater pipeline recently laid has resulted in heavy inundation of the colony. “During floods last year, we had to endure loss of ₹5-6 lakh as all our furniture and appliances were damaged irreparably. Here we are, back to square one,” lamented Srikanth, a resident of the colony.