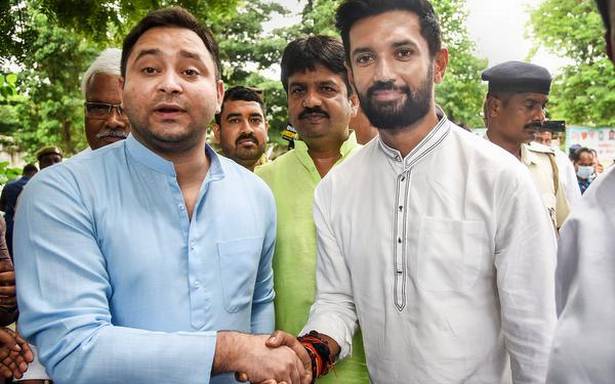 Lok Janshakti Party (LJP) leader and MP Chirag Paswan on Wednesday met Rashtriya Janata Dal (RJD) leader Tejashwi Yadav in Patna to invite him to the first death anniversary of his father and founder of the LJP, Ram Vilas Paswan.

The meeting triggered speculation over the forging of a new alliance in Bihar politics but Mr. Paswan said this was not “a moment to talk about politics”. However, when asked about RJD chief Lalu Prasad’s earlier suggestion that both the young leaders should come together, Mr. Yadav told mediapersons, “We can’t say anything after what Lalu-ji has said.” He added, “Late Ram Vilas Paswan-ji had very good family relations with Lalu-ji.”

Mr. Tejashwi Yadav also said, “I remember learning some of my early lessons of politics while campaigning with Ram Vilas Paswan-ji in the 2010 Assembly polls, which he had fought along with my father Lalu Prasad.”

Mr. Chirag Paswan said that he would be going to Delhi on Thursday to meet the RJD chief, Mr. Lalu Prasad. “Today, I’ve come to invite Tejashwi bhai on the first death anniversary of my father, which is going to be held on September 12. And this meeting has nothing to do with politics. Had my father been alive, he would have certainly liked Lalu-ji and his family to be part of any function taking place in my family and being a small part of him [Ram Vilas Paswan], I’m just carrying forward the tradition.”

When asked if had he met Bihar Chief Minister Nitish Kumar to extend an invitation, Mr. Paswan said, “I have sought time from him and got my name registered there but am yet to get any response from him.”

“I want to invite everyone who worked with my father to pay their tributes. I hope to meet the CM before September 12,” he said.

Mr. Chirag Paswan has invited Prime Minister Narendra Modi, Home Minister Amit Shah, Congress leaders Sonia Gandhi and Rahul Gandhi, and others, to the event. He has also extended the invitation to his estranged uncle and Union Minister Pashupati Kumar Paras, and cousin Prince Raj, who recently caused a split in the LJP to lay claim to the party’s legacy. Five out of six LJP MPs left Mr. Chirag Paswan to join hands with Mr. Paras. Later, Mr. Chirag Paswan undertook an ‘aashirwad yatra’ in Bihar to showcase the support of party leaders and people towards him.

A few days ago, Mr. Chirag Paswan, the LJP MP from the Jamui reserved seat, installed a bust of his late father, Ram Vilas Paswan, at his official bungalow in Delhi on 12, Janpath Road, which the Union Urban Development Ministry has asked him to vacate. Mr. Chirag Paswan refuted the charge that he may have installed the bust of his father to remain in the bungalow. “As of now, the government has permitted me to stay in the bungalow and the bust is a symbol of the party’s love for the leader and my father Ram Vilas Paswan-ji. The bust should never be seen as an attempt on my part to encroach the property,” Mr. Chirag Paswan said.