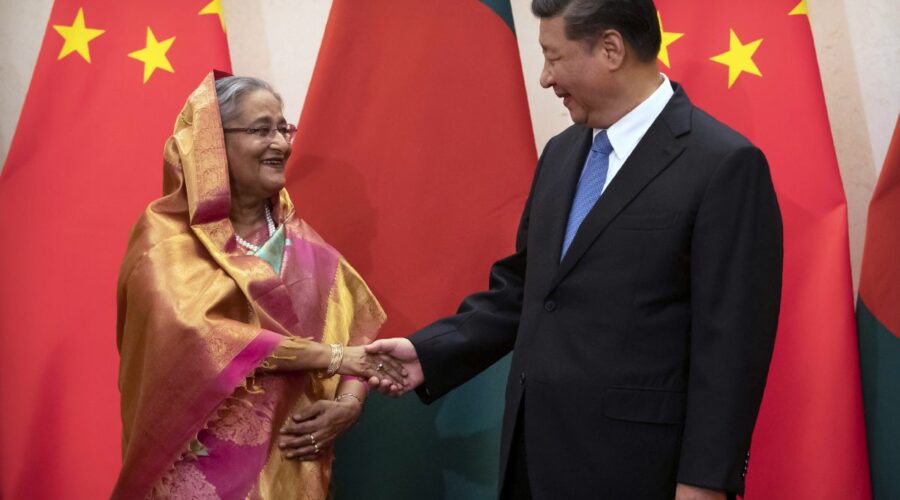 We can expect to see more Chinese wolf warrior diplomats on the prowl, in India’s neighbourhood, though its mailed fist is not so visible while dealing with India, observes Colonel R Hariharan (retd).

China’s ‘wolf-warrior diplomacy’ — that started with a public spat between State Councillor Yang Jiechi, China’s top foreign policy official, and US Secretary of State Antony Blinken at their meeting in Alaska in March — showed its fangs recently in Dhaka.

The first-ever Quad summit initiated by the US attended by India, Japan and Australia held in March 12 seem to have triggered the wolf warrior reaction.

On May 10, Chinese Ambassador to Bangladesh Li Jiming speaking at a public platformed warned that Bangladesh’s relations with China will ‘substantially get damaged’ if the country joins the Quad, a US-led initiative.

Li added,obviously it will not be a good idea for Bangladesh to participate in this small club of four countries.

He undiplomatically added from the public forum, ‘So, we don’t like to see any form of participation by Bangladesh to this small group of elite countries”‘

Li called the Quad a ‘narrow purposed’ geopolitical clique, intent on working against China’s resurgence and its relationship with neighbours.

‘Quad says it’s for economic purpose and security and so on. But that is not true. We know that it is aimed at China,’ Li added after the first-ever Quad summit of leaders of the US, India, Japan and Australia held in March.

The Chinese ambassador’s ‘warning’ on Quad comes shortly after China’s State Councillor and Defence Minister General Wei Fenghe’s more diplomatic remarks, when he made a fleeting visit to Dhaka in the last week of April.

After meeting with Bangladesh President Abdul Hamid, General Wei added that to jointly maintain regional peace and stability, the two sides should make joint efforts against powers outside the region setting up military alliances in South Asia and practising hegemonism, an obvious reference to the Quad.

Bangladesh, Momen said, maintained a non-aligned and balanced foreign policy and it would decide what to do following that principle.

‘We are an independent and sovereign State. We decide our [own] foreign policy. But yes, any country can uphold its position,’ he said.

Momen said China can state its position and Bangladesh always welcomes what others say.

‘We will listen to what they say. But we will decide what is good for us.’

The Bangladesh foreign minister added they recall with respect what others say, but did not expect such behaviour from China.

Bangladesh and China turned their relationship into a strategic partnership in October 2016 with a deal signed between Prime Minister Sheikh Hasina and Chinese President Xi Jinping.

As part of the Belt and Road Initiative, the two countries have signed deals worth about $21 billion for upgrading infrastructure, particularly in transport, power and IT sector.

China has emerged as Bangladesh’s largest development partner in recent years. Its lending has surged since 2018.

Perhaps, this conditioned the Bangladesh foreign minister to be careful in expressing his nation’s unhappiness at the Chinese ambassador’s comments, close on heels of advice from the Chinese defence minister a few weeks earlier.

The Daily Star of Dhaka in its editorial minced no words, calling the Chinese representative’s comments as ‘undiplomatic, uncalled-for and therefore unacceptable.’

The newspaper reminded that China was welcome to express their opinion, ‘it shouldn’t extend to telling us what we can or cannot do as an independent nation.’

It is not surprising that the Chinese foreign ministry has defended its ambassador’s ‘warning’ against Dhaka’s participation in the anti-China ‘club’ would result in substantial damage to its relations with China.

Asked for her reaction to the Bangladesh foreign minister’s comments, Chinese foreign ministry spokesperson Hua Chunying told the media that she had not seen the remarks.

‘China and Bangladesh are very good neighbours. We have been developing bilateral relations based on mutual trust and peaceful co-existence, and we have been firmly supporting each other, on issues bearing on respective core interests and major concerns,’ Hua said.

‘We all know what kind of mechanism the Quad is. China opposes certain countries’ efforts to form an exclusive clique, portray China as a challenge, and sow discord between regional countries and China,’ Hua added, justifying the ambassador’s remarks.

The Chinese Communist party tabloid Global Times, hailing the Alaska spat in April as China’s ‘wolf-warrior diplomacy’, had pompously declared ‘The arrogant Western world led by the US is no longer eligible to deal with the world’s second-largest economy with a condescending attitude.’

This is probably the backdrop to the wolf warrior mindset used to browbeat small neighbours of Quad countries, particularly in India’s neighbourhood.

Sri Lanka is yet to recover from Chinese Defence Minister General Wei Fenghe’s visit to Colombo after his Dhaka visit, when the government was locked in passing the controversial Colombo Port City project Bill in parliament.

The project developed with China’s assistance is a prestigious one of the Belt and Road Initiative.

Undoubtedly. the Chinese defence minister’s visit was to apply pressure on Sri Lanka, when it is taking a crucial decision affecting China.

After the meeting, General Wei remarked peaceful development and win-win cooperation is the global trend and the ‘right way’ forward.

In an unstated reference to the Quad, he said certain major countries were keen to form cliques and factions and seek regional hegemony, which goes against peoples shared aspiration and severely harms the interests of regional countries. Analyst Maria Siow writing in the South China Morning Post on April 17, 2021 posted the question ‘Himalayan Quad: Is China about to start its own security bloc with Nepal, Pakistan and Afghanistan?’ The rhetorical question has some relevance considering that peaceful borders and territorial integrity are China’s core concerns.

The moot point is how does such a strategic alliance add value to China, which is already well entrenched, either overtly or covertly, in the body politics of all the three neighbours of India.

While China is the lynch pin of Quad, there is no common motivating factor for Nepal, Pakistan and Afghanistan to form a security bloc, unless it is India.

As Andrew Small, author of the book The China-Pakistan Axis: Asia’s new geopolitics says China-Pakistan relations ‘are based on shared hostility towards India, thrive on many common interests. A long history of secret deals between the two armies overrides the problems of Islamic extremism.”‘/p>

But this is not the case with Afghanistan or Nepal.

Their strategic narratives in relation to India are substantially different and complex dictated by prevailing geo-strategic realities.

China’s own strategic end goals widely differ in respect of the three countries.

China’s substantial economic assistance and loans as members of the Bridge and Road Initiative is perhaps the common factor among them. Nepal is a case in point.

Chinese Ambassador Hou Yanqi had been trying to settle the differences between Prime Minister K P Sharma Oli and former prime minister Prachanda who are locked in a factional fight within the Communist party of Nepal.

Though she has not succeeded so far, there is less visible success of China is in whittling down Nepal’s dependency on Indian investments.

A Xinhua report last September quoted Nepal government statistics to say the country had received FDI pledges from China amounting to $220 million in fiscal 2019-2020 against pledges of $116 million in 2018-2019, in spite of the Covid pandemic in 2020.

It was two thirds of the total investments committed by foreign investors, according to the industry department.

We can expect to see more Chinese wolf warrior diplomats on the prowl in India’s neighbourhood, though its mailed fist is not so visible while dealing with India.

Colonel R Hariharan, a retired military intelligence officer, is associated with the Chennai Centre for China Studies and the South Asia Analysis Group.