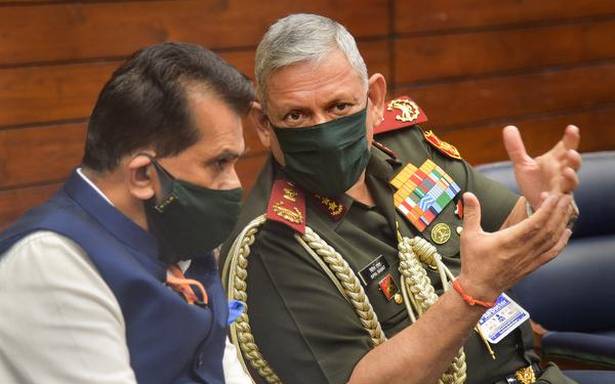 Technology is important facet of war fighting must be understood, he notes

“A weaker adversary like Pakistan will always try to keep us engaged through proxy war and they are in fact a proxy of our northern adversary, that is China, which is becoming more and more aggressive”, said Chief of Defence Staff Gen. Bipin Rawat on September 15. He stressed the need for jointness of the Services and understanding that “technology is a very important facet of war fighting.”

“As far as our northern adversary is concerned, since we have unsettled borders with them and they have shown aggression on the east coast in the South China Sea with nations in that area, are they likely to, therefore, show aggression on our northern borders? Whether that happens in the form of direct aggression or they use technology, we have be prepared. And this preparation can happen only if we work together,” he stated on defence reforms during a talk organised by the India International Centre.

While laying emphasis on cyber capability and artificial intelligence, he noted that there was lot of scope for looking at the space-based systems. The character and nature of wars have changed. Countries would employ technology to put pressure on other nations. “Technology is becoming the need of the hour,” he asserted.

The Afghanistan situation had to be watched. Nobody ever thought the Taliban would takeover that country so fast. “We don’t know what is likely to happen in the future. There could be more turmoil and more changes which, as of now, cannot be anticipated,” he pointed out.

On the global situation, he observed that the world was in turmoil and the rise of China had happened faster than people had envisaged.

“We are now heading back to a bi-polar or multi-polar world, and whether it is good or bad for international community only time will tell. What we are certainly seeing is more aggression on the part of nations, specially the one that is trying to go into the bipolar world or making their presence felt, that is China. They are becoming more and more aggressive and we share land borders with them. It’s time for us to start looking at our strategies as to how we are going to deal with the two borders… aggressive adversaries, Pakistan on the western front and China on the north,” he remarked.

China was now making friends with Iran and Turkey and they have stepped into Afghanistan. “They will get into Afghanistan in the time to come… Will that lead to a clash of civilizations,” he asked.

There was not just need for integration of the Services. There was also need for their integration and the Central armed police forces and with civil agencies too, Gen. Rawat said while discussing the formation of integrated theatre commands.