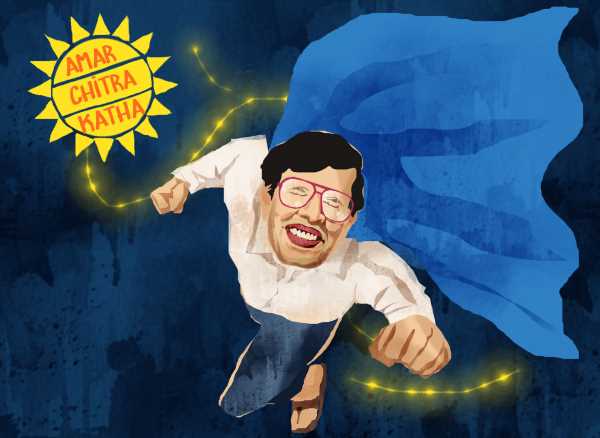 Uncle Pai, as he was fondly called, inculcated in Indian children a love for and interest in India’s glorious past and its heroes.
A fascinating excerpt from Sanjeev Sanyal and Rajesh Singh’s’s Iconic Indians: 75 Extraordinary Individuals Who Inspired The Country.

He was childless, but for millions of young Indians across the globe, he was a father figure, for he told them fascinating Indian folk tales, stories of the Ramayana and the Mahabharata, and those of the great men and women of the ancient civilisations.

He told the stories in a way that helped the kids understand, enjoy, quickly grasp and remember them for a long time — his medium was illustrated comics.

In the process, he became an ‘Uncle’ for the millions who he had never met. His comic book series, the Amar Chitra Katha, went on to become amar or immortal, like the stories it carried.

Anant Pai or Uncle Pai, as he was fondly called, not only revolutionised the Indian comic industry — he created it, for there was none before — but also inculcated in Indian children a love for and interest in India’s glorious past and its heroes.

The trigger for his venture was a quiz programme that aired on Doordarshan in February 1967. He was dismayed by the contestants’ performance: While many of them were able to answer questions relating to Greek mythology, they were clueless on queries concerning Indian culture and folk.

Their faces were blank, for example, when asked to name Lord Rama’s mother. Something had to be done to set the situation right, he said to himself.

The idea of Amar Chitra Katha was seeded.

Having an idea was one thing, but implementing it was another.

A decade earlier, he had tried to establish a children’s magazine named Manav, but the venture failed.

Disappointed, Pai joined The Times of India books division as a junior executive. There he was actively involved in a project that the organiSation had initiated to promote comic books.

The Times Group had launched Indrajal Comics, which brought to youngsters popular comics such as Mandrake the Magician and The Phantom.

However, the passion to create something new, something that Indians could identify with, persisted.

Pai left his job the same year that the quiz programme had aired and started Amar Chitra Katha (ACK), a comic book series; the Times Group, to whom he sounded the idea, was reportedly not interested.

He faced rejections from several established publishers, with Jaico and Allied Publishers being among them. They perhaps believed that no market existed for the stories he planned to tell.

Many of them would point out that the market for Indian comic books was already taken care of by Western comics, which the young Indian readers lapped up with relish.

Given the fantasy that these foreign tales conjured, which child would be interested in age-old stories of India?

Mirchandani must have been impressed by the young man’s passion and confidence as he took over ACK’s distribution on a pan-India basis.

Pai worked as a writer, editor and publisher — all rolled into one.

ACK became a huge success, a publishing milestone, selling over 90 million copies of some 400 titles by the time he died.

Pai had proved the naysayers wrong.

ACK is an incontestable part of the childhood of anyone who grew up in India in the 1970s and 1980s. The first issue of Krishna from the ACK stable came out in 1969, in collaboration with an illustrator named Ram Waeerkar.

It was followed by stories such as Shakuntala, The Pandava Princes and many more.

The heroes of the Ramayana and Mahabharata were regularly featured in the comic books, and they gained wide acceptance.

Initially, Pai had been writing the stories himself, but later brought in a team of writers and editors, which included Subba Rao, Luis Fernandes and Kamala Chandrakant.

He ensured that the stories his comic books told were those of Puranic heroes, brave Indian kings, queens, warriors as well as tall figures of contemporary India, such as Mahatma Gandhi and V D Savarkar.

He wanted the youth of India, who had so far been fed on the tales of Western heroes, to appreciate the rich cultural history that their own nation offered.

Buoyed by the success and the demand from many established publishing houses, including newspapers and magazines, Pai floated Rang Rekha Features, the country’s first comic and cartoon syndicate.

Tinkle, an anthology of children’s short stories, humorous pieces and educational articles in comic book format, was born as part of the syndicate.

He then sold Rang Rekha Features to a Hyderabad-based animation studio in 2000.

Anant Pai was born on 17 September 1929 in Karkala in the erstwhile Madras Presidency, to a Konkani-speaking family.

He lost his parents when he was only a toddler and was raised by his maternal grandfather.

After his grandfather’s death in 1944, he moved to Bombay and studied at a school in Mahim (north central Mumbai).

His extended family persuaded him to study science in college, and he did a course in chemical technology. Eventually, he became a dual degree holder from the University of Bombay, but never pursued a career as a chemical engineer.

Along the way to becoming the ‘father of the Indian comic industry’, he also made a name as a motivational and personality development speaker — his Partha Institute of Personality Development in Mumbai focuses especially on children and teenagers.

He succumbed to a heart attack on the evening of 24 February 2011 in Mumbai.

Excerpted with permission from 75 Extraordinary Individuals Who Inspired the Country by Sanjeev Sanyal and Rajesh Singh, published by Rupa Publications.