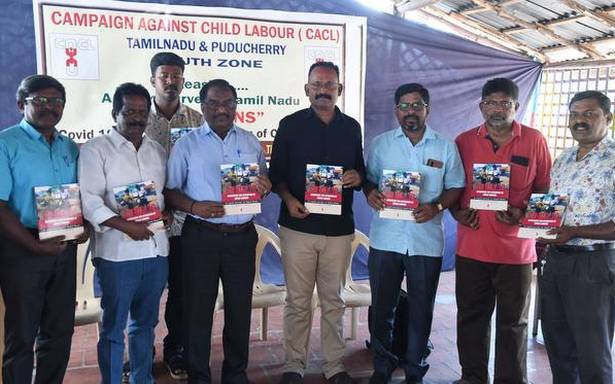 A study was conducted in 24 districts of the State

There has been a significant increase in the proportion of working children from 28.2% to 79.6% out of the 818 children who were surveyed, mainly because of the COVID-19 pandemic and closure of schools, reveals a study conducted by Campaign Against Child Labour (CACL).

CACL State Convenor R. Karuppusamy released the rapid survey titled ‘COVID-19: Reversing the Situation of Child Labour’. The study conducted in 24 districts of the State showed that child labour had rapidly increased in North, South and Eastern districts of the state. The survey was conducted by interviewing children in the age category 6 to 18 during September and November 2020.

The survey showed that child labour increased to around 280% among the vulnerable communities. “Children from Scheduled Caste and Scheduled Tribes and those from lower economic background had to work to financially support their families during the pandemic,” said Mr. Karuppusamy.

The survey found that children were working in bakery shops, book stalls, two wheeler service workshops, newspaper distribution, ration shops, vegetable shops and as domestic helpers. Children were involved in at least 23 different types of occupations in the service sector.

Most of the older children were found to be working for more than eight hours a day.

Nearly 18.6% of the children who were surveyed said that they often face physical, mental and verbal abuse from their employers. Children, depending upon their age, earned between ₹ 100 and ₹ 400 as wages per day.

According to the survey, more than 94% of children have said that the economic crisis at home and family pressure had pushed them into work. Most of their parents had lost their jobs or earned very low wages during the pandemic. A small percentage of children said that they started to work in order to buy smartphones.

Mr. Karuppusamy emphasised the steps that needed to be taken to ensure that the students attend the schools.

The government must increase the rate of wages offered under Mahatma Gandhi National Rural Employment Guarantee Scheme, especially in rural areas. This is essential to create more jobs for adults.

Vulnerable families should be covered under comprehensive social protection schemes to ensure a decent living.

He suggested that labour laws and regulations must be strictly enforced. Child Protection Committees should work efficiently to identify vulnerable children and support their families through social protection schemes.

The school teachers must ensure that all students who were studying earlier are brought back to schools, he added.

CACL zonal and district convenors also participated in the event.