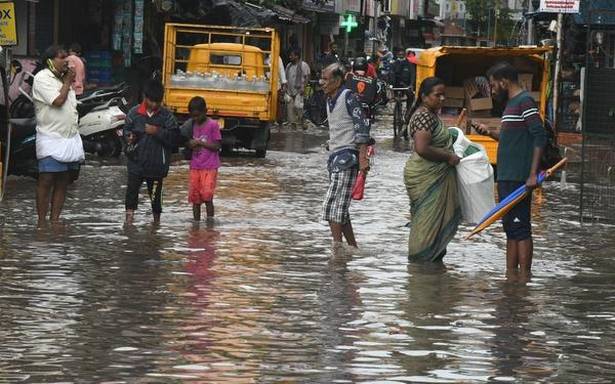 Chennai has received an average of nearly 224 cm since last November; there has been 44% increase in the number of rainy days between June and November this year, the study found

The past one year, since November 2020, has been remarkable in terms of rainfall for Chennai, as the city has received nearly 62% more rains than its average for the year till now.

An analysis by Chennai Rains (Chennaiyil Oru Mazhaikalam), a weather blogging site, has found that 11 weather stations/rain gauges in the city have received above 200 cm of rainfall since last November to November 16 this year. This was done based on the data of the Tamil Nadu State Disaster Management Authority’s network and the Meteorological Department. The weather station at the DGP office recorded 283 cm during this period, which is double the average annual rainfall (140 cm) of Nungambakkam. Some of the stations analysed were Perambur, Ayanavaram and Tondiarpet.

According to the data compiled, Chennai has received an average of nearly 224 cm since last November. It has been a phenomenal year in terms of rainfall, as there has been 44% increase in the number of rainy days between June and November this year, comparing to the same period last year.

K. Srikanth, weather blogger with Chennai Rains, said there have been 568 rainy day instances across all the 11 weather stations in the city. If a particular locality or weather station received a minimum of 2.5 mm in a day, it was counted as as rainy day. For instance, Tondiarpet got 52 rainy days between June and November, which is 126% more than the same time last year.

Going by the rainfall data, the increase in the number of rainy days and heavy rainfall instances indicate that one episode of intense rainfall during early November was not the only reason that triggered localised flooding. High soil moisture and better groundwater table due to consistent rains over the past many months provided conducive conditions for the event, he said.

Some of the global weather parameters that influence tropical cyclone activity and monsoon here too, turned favourable, such as MJO (Madden-Julian Oscillation), which has not been able to complete its global circuit this year. This has become conducive for the Bay of Bengal to churn out new weather systems, Mr. Srikanth added.

Amount of rainfall over the city