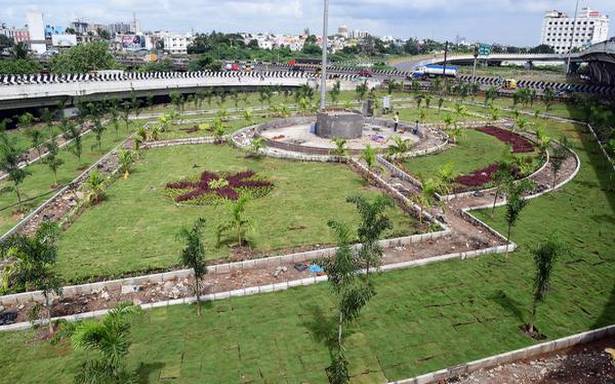 Greater Chennai Corporation has launched a drive for beautification of public spaces managed by other line agencies, under Singara Chennai 2.0 project.

Work on beautification of Koyambedu flyover, 100 feet road median from Kathipara to Koyambedu, Anna Salai, GNT Road and Madhavaram roundabout will be completed shortly. The Highways Department has permitted Greater Chennai Corporation to take up beautification of its spaces in several areas.

“Construction of park at Koyambedu roundabout in 40,000 sq.feet area with Singara Chennai 2.0 logo design has started in Highways land. Greenery work with 120 ornamental trees, grass and fountain will be completed. The estimated cost is Rs.40 lakh. Work is under progress,” said an official.

Similarly, work on Madhavaram roundabout will be taken up by the Corporation with permission from the National Highways Authority of India using funds of Singara Chennai 2.0 project.

Work on beautification of triangular traffic islands near Spencer plaza on Anna Salai has been taken up by Chennai Corporation with permission from the Highways Department. Other beautification work will be taken up along Anna Salai after Metrorail completed some of the work.

Beautification of areas near the Airport and railway stations such as Central and Egmore will be taken up with support from other line agencies.

The tendering process for dynamic lighting of heritage buildings such as Ripon Buildings has been launched.

Following the instructions from Chief Minister M. K. Stalin, Municipal Administration Minister K. N. Nehru has directed the civic body to launch beautification projects in all the 15 zones under Singara Chennai 2.0. A committee headed by MAWS secretary Shiv Das Meena has approved beautification with fountain at 38 locations. Work on beautification of flyovers in Cenotaph Road, Pantheon Road and Gandhi Mandapam Road will be launched shortly.

After Deepawali, the civic body has removed 138 tonnes of hazardous waste and 5000 tonnes of municipal solid waste in the 15 zones, primarily through night conservancy operations within a few hours of the festival celebrations.

Corporation Commissioner Gagandeep Singh Bedi has directed officials to prevent unauthorised dumping of waste and focus more on sweeping of streets to remove hazardous waste from bursting of crackers. The waste will be processed in Gummidipoondi.