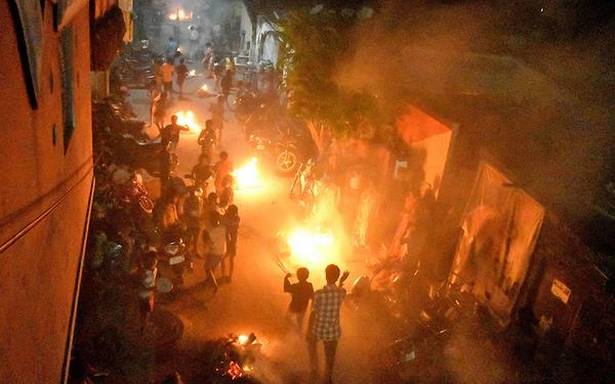 Despite smoke in the ambient air, it was less compared to the previous years as Bhogi and Lohri were celebrated in the city. Bonfires were lit in several residential areas, with children playing drums and singing songs, early in the morning, when a spike was noticed in the levels of particulate matter across the city.

Chintadripet resident Murugan said people burnt garbage, but did not use discarded tyres or plastics to light bonfires. “They burnt leaves, garden waste, old mats and clothes. Our street was full of bonfires and the community came together to celebrate,” he said.

Amandeep, a resident of Royapettah, said his family lit a simple bonfire, in the evening, since they did not want to discontinue the age-old practice of burning old things on Lohri.

“Families would burn so many old clothes earlier. But now we have brought that down to just one small piece of cloth and a few twigs,” he said.

TNPCB chairman A.V. Venkatachalam said during joint night patrol by officials of the board, along with staff from the Greater Chennai Corporation and the police, over 2.6 tonnes of waste tyres, kept for burning, were seized and sent to the common hazardous waste management facility in Gummidipoondi. He added that the airport authorities had informed them that some flights were delayed due to the smog.

Asked why some places had more smog than some densely-populated residential localities, S.M. Shiva Nagendra, professor, Department of Civil Engineering, IIT-Madras, cited air circulation. “It varies from place to place. A dense building arrangement will be warmer and an open space cooler, which is why hot air is filling up open spaces like roads and grounds,” he said.

On whether the number of monitoring stations was enough for such a large State, Sarath Guttikunda, founder-director, Urban Emissions, said: “Monitoring can tell us how much, where and when the pollution is. However, increasing the number of monitoring stations does not counter the pollution problem, even though, sadly, in all management plans, monitoring is presented as a solution to pollution. For all practical purposes, 15 stations are still not enough for Tamil Nadu; our estimate is 255, using CPCB’s thumb rule.” Perhaps more stations will be added in the coming years, he added.