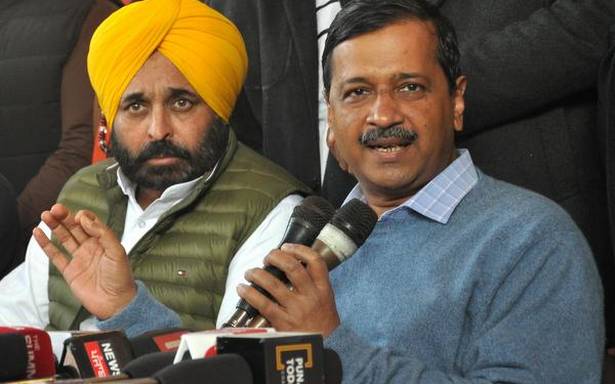 “It took them five years to register an FIR.”

AAP leader Arvind Kejriwal on Saturday targeted the Congress government in Punjab, alleging that it is not being able to arrest SAD leader Bikram Singh Majithia who has been booked under the Narcotic Drugs and Psychotropic Substances Act.

Taking on the Charanjit Singh Channi-led regime, Mr. Kejriwal, whose Aam Aadmi Party (AAP) is the main opposition party in Punjab, said the state government does not have the courage to arrest the former Punjab minister.

Mr. Majithia has been booked under the Narcotic Drugs and Psychotropic Substances (NDPS) Act on the basis of a 2018 report of a probe into a drug racket in the state.

"They (the state government) have just registered an FIR and then boasted about it," Mr. Kejriwal, who is the chief minister of Delhi, said when asked a question on Mr. Majithia.

"It took them five years to register an FIR," he said and asked how many days have passed since the registration of the case.

They do not have the courage to arrest him, said Mr. Kejriwal while talking to reporters in Amritsar in poll-bound Punjab.

He slammed the state government for not having been able to nab Mr. Majithia despite his anticipatory bail being rejected in the Mohali court.

How many days have passed since the rejection of the anticipatory bail and till now, arrest has not been made, he said.

Mr. Kejriwal alleged that the Congress government was least bothered about drug menace and sacrilege issues, and added that only fight for chair is going on in the ruling party.

After the Mohali court dismissed the anticipatory bail plea, Mr. Majithia had moved the high court.

01/01/2022 India Comments Off on Channi govt does not have courage to arrest Majithia: AAP leader Kejriwal
India