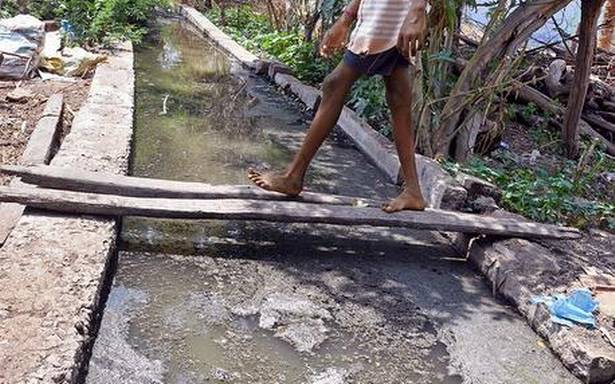 It causes health hazards to residents

The inflow channel that flows from Mariamman Teppakulam to Iravathanallur, feeding the large Kathiyanoor tank, is plagued with untreated sewage, causing health hazards to residents.

Iravathanallur, which was added to the Corporation in 2011, does not have proper underground drainage connections. Houses along the stretch release drainage water directly into the Panaiyur channel that flows through the area, giving rise to stench and a variety of diseases.

Around 60 years ago, the channel used to bring tremendous inflow to Iravathanallur from the Vaigai through Mariamman Teppakulam. The inflow channel would irrigate acres of lands brimming with agriculture, said M. Sethuraman, a farmer and resident of the area. However, the channel now has shrunk into a mere width of four feet. It only contributes sewage to Kathiyanoor tank. N.C. Sundaravalli, a resident who has lived in Samithope, an area along the channel carrying Vaigai waters, says during rainy days, sewage water tides into their area.

“I do not remember a single day in both summer and winter when mosquitoes have not bitten me. We are vulnerable to diseases and have to repeatedly visit the clinics because others have no care about where their drainage water goes,” she says. Ms. Sundaravalli’s house is barely five feet from the inflow channel. She and her neighbours, including S. Michaelamma, say that despite complaints to Corporation employees in Zone 3 office, no action has been taken. An official from the Corporation said that the civic body would check and take steps to clean the channel.