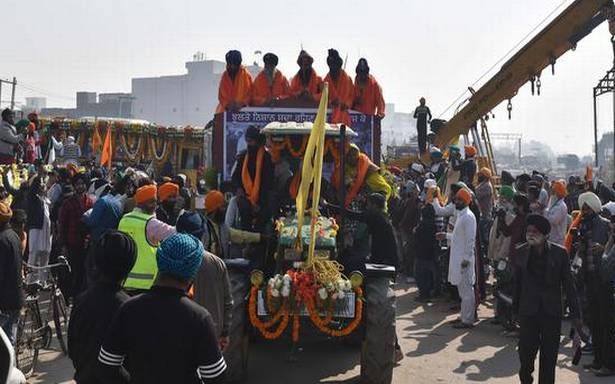 SKM leaders to meet to review situation on Jan 15

Farm union leaders of the Samyukt Kisan Morcha are due to meet again at the end of this week for the first time since calling off their mass agitation on Delhi’s borders last month.

However, the leaders say the government is yet to keep its promises on setting up a committee to look into guaranteed minimum support prices for crops and to withdraw cases filed against farmer protestors in all States, including in the national capital and in poll-bound Uttar Pradesh.

“We wound up our year-long agitation and postponed further action based on a written assurance from the government. But so far, there is no further development on the MSP committee issue from the government’s side,” said Yudhvir Singh, general secretary of the Tikait faction of the Bharatiya Kisan Union (BKU), which had constituted the largest chunk of protestors from U.P. at Delhi’s Ghazipur border.

“The SKM will meet on January 15 to take stock and review the status of the government’s actions to fulfil its promises, and to decide our next steps,” he added.

When SKM leaders suspended their agitation on December 9, it was on the basis of a proposal signed by the Agriculture Secretary, and negotiated via the Home Ministry as well. It said the committee on MSP which had been announced by the Prime Minister would include SKM leaders and also committed to compensate the kin of those who died during the protests, and withdraw cases filed against protestors.

Although the agreement promised that cases filed in all Union Territories and in Delhi would be withdrawn “with immediate effect”, one month later, no action has been taken yet in these regions where police cases come under the jurisdiction of the Union Home Ministry, said Mr. Singh.

The agreement also said the State governments of Uttar Pradesh, Uttarakhand, Himachal Pradesh, Madhya Pradesh and Haryana had agreed to withdraw cases, but only the last has begun the process.

“Haryana has started to take action on this by issuing a notification on December 23, directing that all cases filed from December 9, 2020 onwards should be withdrawn. The process is ongoing. The victim verification process for compensation for 140 martyrs has also started in the State,” said Abhimanyu Kohar, spokesperson for the Rashtriya Kisan Mahasangh, another major partner on the SKM platform.

The State government has said 256 cases have been filed against protestors. However, the SKM estimated that 48,000 farmers had been implicated, as each First Information Report included dozens of named and hundreds of unnamed protestors.

In U.P. and Uttarakhand, which will go to polls next month, no action has been taken to withdraw FIRs so far.

The Centre’s failure to act against Union Minister of State Ajay Mishra Teni, for his alleged role in the Lakhimpur Kheri violence, is also a prickly issue for farm leaders in these States.

Although SKM leaders insisted they would hold the government accountable on its written commitments, they admitted that calling farmers back to the border sites for another mass agitation would be unviable in the near future.

“Most of the Punjab groups which contributed large numbers to the protest are now busy with elections, so they may not be able to join in any movement for next couple of months. And we would also be busy campaigning against BJP in U.P. and Uttarakhand,” said Hannan Mollah, general secretary of the Left-affiliated All India Kisan Sabha, and a member of SKM’s core committee. “If government has not acted by January 15, we will democratically take a decision on the next step,” he added.

While two senior SKM leaders — Balbir Singh Rajewal and Gurnam Singh Chaduni — have floated their own political parties to contest the Punjab polls, the SKM as a whole has, thus far, maintained that it will not campaign in favour of any party.

“We want to raise farmers’ issues during the elections, rather than campaigning for a party. Apart from MSP, we will raise the issue of upcoming Free Trade Agreements, especially with Australia and Canada, which will hurt the dairy sector and other farmers. SKM needs to raise awareness and organise to be a strong nationwide voice for all farmers,” said Mr. Singh of BKU-Tikait.

01/10/2022 India Comments Off on Centre yet to keep promises to farmers on MSP panel, withdrawal of FIRs
India