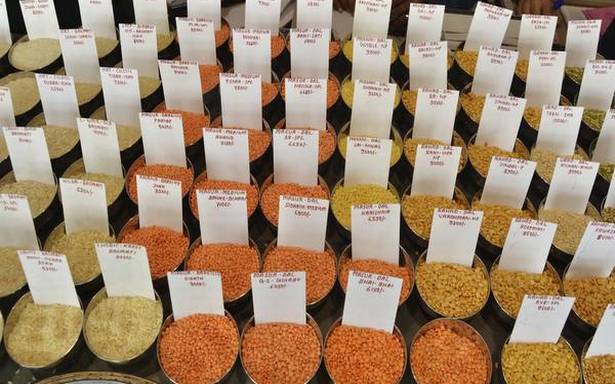 Once the new census data is available, the Centre may consider revising the number of people who get subsidised foodgrains under the National Food Security Act, Food Secretary Sudhanshu Pandey said on Friday. He insisted there is no proposal under consideration as yet, but said the Food Ministry was having conversations on a NITI Aayog paper on the issue, which recommended a reduction in the NFSA coverage.

The NFSA provides for five kg of foodgrains per month to be provided to two-thirds of the country at the subsidised rate of ₹2 per kg of wheat and ₹3 per kg of rice. The current NFSA coverage of 81 crore people was determined on the basis of the 2011 census, and has not been revised since the law was passed in 2013.

At a press conference, Mr. Pandey was asked whether the government plans to revise the coverage in 2021, after the next census. “It is hard to tell. When the number was fixed in 2011, some criteria were used. The NFSA covered 67% of the country’s population, including 75% of the rural population and 50% of the urban population. It was not done arbitrarily,” he pointed out.

“When a revision is to be done, there is an exercise behind it, there is data analysis. Census data is also not available now. When all the tools are available with the government, of course, this can be revisited. Right now, there is no such proposal in front of us,” he added. “This is a law passed by Parliament. Government of that time and Parliament of that time will have to take a call.”

Government think tank NITI Aayog has recently circulated a discussion paper proposing a reduction in the NFSA coverage, to 60% of the rural population and 40% of the urban population, in a bid to curb the food subsidy budget. Mr. Pandey refused to discuss the paper, directing queries to NITI Aayog, but said that he was having “conversations” on the issue.

Right to Food activists and economists such as Jean Dreze, who was instrumental in formulating the NFSA, have argued that with an increased population, the NFSA’s coverage should be expanded, not pruned.

“This is all conjectural. Who deserves ration, it has to be decided on the basis of data. So whether more numbers or less numbers, perhaps it is inappropriate for me to say,” said Mr. Pandey, when asked to comment on the Dreze proposal. “Whosoever will fit the criteria deserves it; whether the number goes up or goes down, he should get it,” he added.

Earlier, in response to the Economic Survey’s suggestion that the food subsidy burden be curbed by increasing the price of foodgrains sold under the NFSA, Food Minister Piyush Goyal had said no such proposal was being considered by the Ministry.

The ration card portability scheme, which is a boon for migrant beneficiaries as it allows them to withdraw their foodgrain allocation at any ration shop in the country,, has seen 15 crore transactions since the pandemic began, at a rate of about 1.5 crore per month. The Ministry’s assessment is that 7-8% of the 81 crore beneficiaries may ultimately benefit from the portability scheme, said Mr. Pandey.