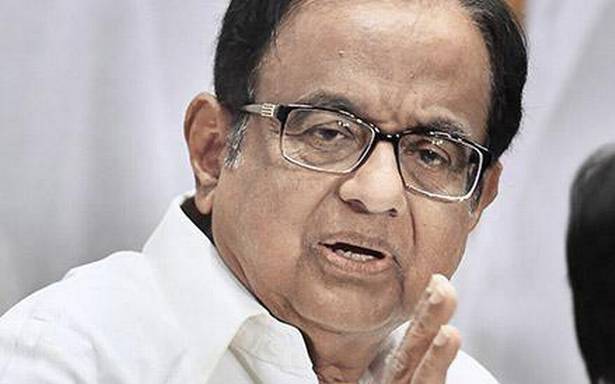 Due to poor handling of COVID-19 pandemic, the Bharatiya Janata Party (BJP) at the Centre had let the situation slip from bad to worse in many States, said senior Congress leader and MP P. Chidambaram here on Saturday.

Speaking to reporters, he said his party had cautioned and suggested to the Centre to take up certain measures on a war-footing. “Our leader Sonia Gandhi wrote six times to the Prime Minister. Former Prime Minister Manmohan Singh had recently wrote to his successor Narendra Modi on ways to tackle the pandemic. It is unfortunate that he did not even bother to discuss or take up the suggestions,” Mr. Chidambaram said.

On Sterlite plant seeking permission to produce oxygen, he said that when the Supreme Court had given a direction, there need not be a discussion on it. “Oxygen is needed to save people suffering in COVID-19 wards of hospitals. So, it is the duty of the government to ensure availability of oxygen,” he said.

The Centre’s attitude in this hour of crisis should change. “At a time when people are worried over the pandemic, the Centre has announced a ‘vaccine festival.’ What is there to celebrate the pandemic. It was announced that COVID-19 vaccine will be administered to all aged above 18 from May 1. But it did not happen. There is no planning. The people are kept in the dark on the government’s next move,” he said.

As if the COVID-19 pandemic had been defeated, the BJP, in its national council meeting on February 21, hailed the Prime Minister with the title ‘Vishwa Guru.’ When in reality, the government had failed, such encomiums would only stoke the anger people have against the Centre. Quoting media reports, Mr. Chidambaram said there was a mismatch between the government’s data on number of people tested positive and those buried or cremated in Karnataka. If the situation was alarming, the government and the officials should admit to it. They should tell the people about the harsh reality and take steps to set things right on a war-footing.

On exit polls, Mr. Chidambaram said the predictions in Tamil Nadu rightly showed the mood of voters. If the DMK government takes charge, it would have a big challenge as the AIADMK had emptied the coffers and also failed to contain the COVID-19 pandemic effectively, he said.

The economy, which was already in tatters due to the inept Central government, would face more problems if there was a total lockdown, he said.

05/01/2021 India Comments Off on Centre has let the situation slip from bad to worse, says Chidambaram
India