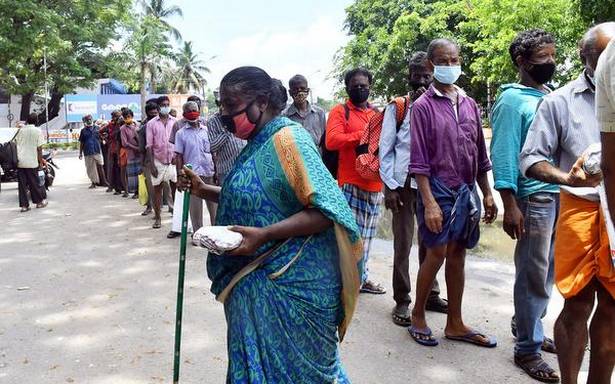 The Centre’s directive comes amid various reports that the poorest of the poor are in dire need of foodgrains but they are unable to procure ration card.

The Centre has issued an advisory to all States and UTs to identify and issue ration cards to the most vulnerable and economically weaker sections of society to ensure their coverage under the National Food Security Act (NFSA).

The Centre’s directive comes amid various reports that the poorest of the poor are in dire need of foodgrains but they are unable to procure ration card.

Addressing a virtual press conference, Food Secretary Sudhanshu Pandey said States and Union Territories have scope to add coverage of 1.97 crore under the NFSA. As many as 14 States have completed 100% coverage quota.

In view of the COVID-19 pandemic, the Food Ministry said it is important to ensure coverage of all eligible identified persons from the most vulnerable and economically weakest sections of population under the NFSA.

On Wednesday, the Food Mministry has issued an advisory to all States and UTs to launch a special drive to reach out, identify and issue NFSA ration cards to the most vulnerable and economically weakest sections of the population in urban and rural areas.

States should do this by utilising the available coverage under their respective NFSA limits, the Ministry said in a statement.

The Ministry asked States and UTs to reach out to vulnerable and weakest sections of the society such as street dwellers, rag pickers, hawkers and rickshaw pullers.

The operational responsibilities of identification of eligible persons and households under NFSA and issuance of ration cards to them rest with the States and UTs, the statement said.

States and UTs may be aware, the advisory said, that during the current pandemic scenario, there are several reports/grievances through media, newspapers, NGOs and individuals stating that the vulnerable and weakest sections of the society, who are in dire need of foodgrains, are unable to procure ration cards.

It is felt that some of the poor and needy people, who also may not have address proof, may find it difficult to obtain a ration card, it added.

Under the NFSA, the government provides 5kg of wheat and rice per person every month at highly subsidised rate of ₹2-3 per kg. Around 80 crore people are currently covered under this law passed in 2013.

The government buys wheat and paddy from farmers at minimum support price to meet the foodgrains requirement under the food law.

State-owned Food Corporation of India is the nodal agency for procurement and distribution of foodgrains.