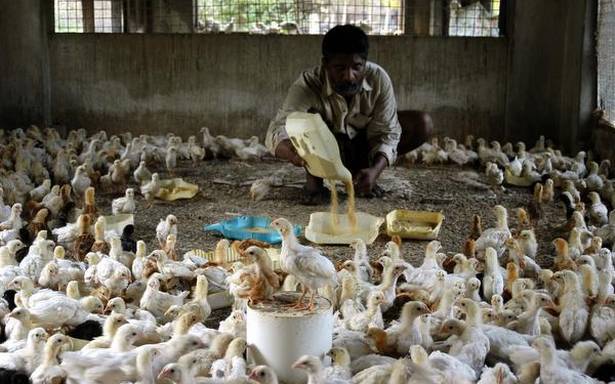 There was some relief for the beleaguered poultry industry this week with the Centre deciding to allow the import of crushed genetically modified soybean, which is a major ingredient of poultry feed. However, environmental activists have raised concerns about the permission given for something derived from a genetically modified plant to enter the human food chain, given that India’s regulatory system has yet to approve GM foods.

The poultry industry has been crushed by multiple disasters over the last year and a half. In January 2020, a false rumour that coronavirus could be spread by eating chicken meat led to a crash in demand. If the losses in both the broiler and layer sectors are included — that is, both meat and eggs — it amounted to ₹28,000 crore, according to All India Poultry Breeders Association chairman Bahadur Ali. A year later, avian flu cases led to another crash, followed by a crippling rise in the prices of poultry feed. With farmers facing fresh losses and a reduction in capacity, chicken prices for the retail consumer have also spiked.

“Poultry feed makes up 65% of the cost of production for the farmer. Soy meal [which is left over after oil is extracted from the bean] is the main protein ingredient in the feed, especially for broilers. Over the last three to four years, soy meal has been available at an average cost of ₹34 to 36/kg. This month, it shot up to ₹96/kg. That kind of price spike is simply unsustainable,” said Mr. Ali, whose company also manufactures feed.

Apart from a poor harvest leading to shortages in soy, he blames the high prices on major corporates who are recent entrants to the commodity business, as well as other entities speculating on the commodities markets.

The poultry industry has been lobbying for the import of soymeal to tide over domestic shortages and tame prices, but have been stymied by the grey area of regulation regarding genetically modified ingredients, given that most imported meal comes from GM beans.

On August 10, the Department of Animal Husbandry notified the Customs department that soymeal and oil cake from GM soy would be permitted for import. In a letter to the poultry breeders, the DAHD cited the Environment Ministry saying it had no objection “since soya de-oiled and crushed cake did not contain any living organism.” Further, the Food Safety and Standards Authority of India also washed its hands of the matter, saying that “anything which is non-food [not consumed by humans] is not within the ambit of the FSSAI Act, 2006” and thus it would not regulate animal feed.

The Coalition for a GM-Free India, which includes consumer rights groups and sustainable farming groups, termed the decision “highly objectionable and legally untenable”. It noted that the 1989 rules of the Environment Protection Act applied not just to GM organisms, but also products and substances thereof. A 2007 amendment exempting foodstuffs derived from GMOs if the end product was not a living organism cannot be applied in this case as it refers to animal feed, not foodstuffs, claimed the Coalition’s convener Kavitha Kuruganti. She added that FSSAI has previously regulated antibiotics in animal feed.

“In the end, with two regulators saying that [livestock] feed does not concern either of them, the public is being subjected to the hazards of this genetically engineered feed affecting the human food chain,” said Ms. Kuruganti.