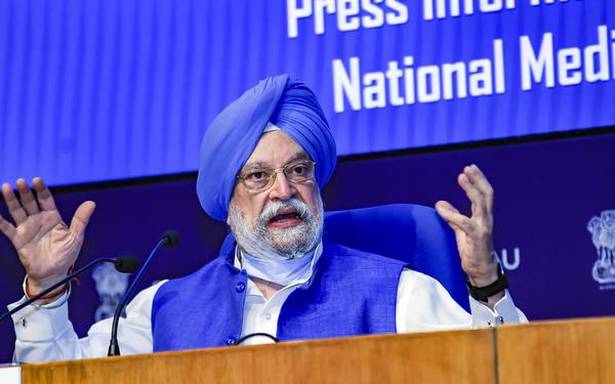 There is an element of mischief and wishful thinking, he says

Minister of State for Housing and Urban Affairs Hardeep Singh Puri on Monday said the 60 retired civil servants who recently endorsed an open letter expressing concern over the Central Vista project were a disgrace to the country. The letter was not based on facts and some of them needed to have their head examined before signing it, he stated at a press conference.

The letter, addressed to Prime Minister Narendra Modi and the Urban Development Minister, said: “This project began, if reports are to be believed, because of a superstitious belief that the present Parliament building is ‘unlucky’, as well as with the thought of leaving a particular government and its leader’s impression on the architecture of Delhi…”

Terming them educated fools, Mr. Puri said any civil servant with about 40 years of experience would not rely on reports that needed to be “believed”. Without naming one signatory, he said the retired official was Cabinet Secretary to the Government of India when the plan to have a new Parliament building started taking shape in 2012.

It was in 2012 that the OSD (officer on special duty) to the then Lok Sabha Speaker, Meira Kumar, had written to the Urban Development Ministry about it. Senior Congress leader Jairam Ramesh had also written an article on the issue. “And now in 2021 it is said that the new Parliament is being constructed because of a superstitious belief ?,” he said. He did not receive the letter that had been circulating in social media, he asserted.

The new building was being constructed as the present one was cramped. As the freeze on parliamentary seats and seat allocations to States would be lifted in 2026, the number of members in both the two Houses would increase, he noted.

There was an element of mischief and wishful thinking (of those opposing the project). When they saw that the Supreme Court cleared it, they went to the Delhi High Court where also the government had now got the clearance and a cost of ₹1 lakh was imposed on the petitioner, he said.

On Monday, the High Court ruled that the petition was motivated. It said the national project was vital and essential.

The Minister said that people would remember how during the crisis, Opposition leaders initially fuelled vaccine hesitancy, targeted domestic manufacturers and then demanded that everyone be vaccinated. “Whose side you are on,” he asked. Wondering on what basis the two domestic manufacturers were criticised, he said he at times thought that it was all an attempt to make the country dependent on foreign manufacturers.

Refuting a media report, which suggested that the construction work for the Prime Minister’s residence was likely to start in August, Mr. Puri said its conceptual designs had not yet been presented to the Ministry.

Over the past several months, a false narrative was being built, he alleged. He disputed the purported project cost of ₹20,000 crore being quoted to target the government, stating that currently the focus was on just two of the sub-projects: the new parliament building and Central Vista avenue, involving a total estimated expense of about ₹1,300 crore.

The Minister said that about 900 of the 1,300 workers deployed at the construction sites had been vaccinated so far and COVID-19 related protocols were being adhered to strictly.

The existing Parliament building would eventually be gutted from inside and the space redeveloped, but the external facade and iconic elements would be preserved, he added.