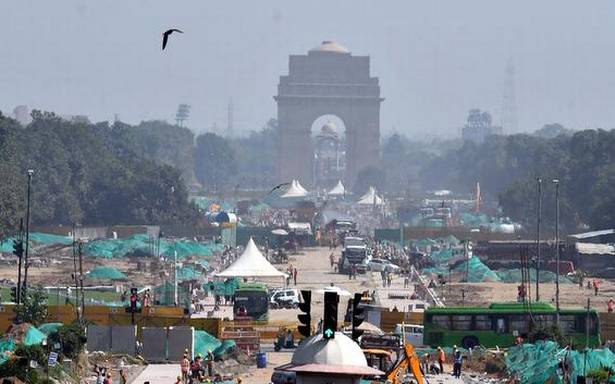 CPWD contract given to Jharkhand-based Kamaladityya Construction for ₹206.49 cr

The construction of a new residence and office complex for the Vice-President of India near Rashtrapati Bhawan is expected to start in December and take 11 months to complete, according to Central Public Works Department (CPWD) sources on Tuesday.

As a part of the redevelopment of the Central Vista, which stretches from Rashtrapati Bhawan till India Gate and includes government offices on both sides, the proposed Vice-President’s Enclave would be constructed on a 15-acre plot near North Block and Rashtrapati Bhawan, according to the CPWD’s plans. Currently, the plot houses pre-Independence era hutments for Defence Ministry offices, which are being moved to two new buildings outside of the Central Vista.

A senior CPWD official said the process of vacating the hutments was on and the construction of the V-P Enclave would begin next month. The current V-P residence on Maulana Azad Road would be demolished to make way for buildings of the new Common Central Secretariat (CCS)

On November 15, the CPWD wrote to Jharkhand-based Kamaladityya Construction Pvt. Ltd. accepting its bid of ₹206.49 crore, which was 3.52% below the estimated cost of ₹214.03 crore. The company’s bid, which was the lowest of the six financial bids opened on November 2, included ₹189.15 crore for the construction of the complex and ₹173.42 crore for five years of operation and maintenance costs. The CPWD said the 11-month timeline for completion would begin 22 days after the letter was sent.

According to the CPWD’s tender document, the V-P Enclave would be a reinforced cement concrete framed structure building.

“The existing offices of North Block shall continue to function during the entire period of execution of this project, therefore utmost care is required to minimise construction noise, dust free area and other construction activity related issues,” the tender document had said in August.

The complex would include the V-P’s residence, a secretariat, a guest house, a sports facility, staff quarters, barracks and ancillary buildings.