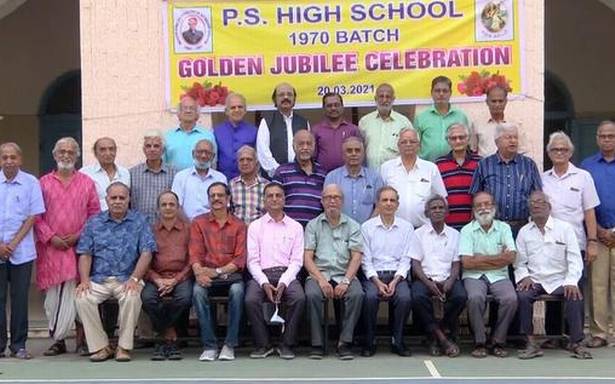 This batch of students enrolled with the school between 1964 and 1970.

The 1970 batch had 40 students per section, with the sections spanning from A to G. As even landlines were a rarity in those days, the task of tracing contacts from 50 years ago was Herculean.

Fortunately, TN Janakiraman, Prabhakaran, CR Ravi, Easwaran and Raman and myself, all belonging to this batch, remained in the same address since our days at school.

This factor enabled us to establish an action group, which was instrumental in expanding the circle of contacts to 49 members.

As this group connected with their schoolmates, they noticed great willingness to join the group, a lack of contact yawning across 50 years.

By October 2020, the members had established communication with the current headmistress of the school, Kala R. and the Secretary of PS Educational Society, K. V. S. Gopalakrishnan. During this process, the group also took stock of the school’s current requirements to ascertain the possible ways in which they could contribute towards its advancement. Through these interactions, the need for upgrading the facilities at the school’s computer lab was understood and conveyed to members of the group.

With contributions being made by the members of the group, the efforts commenced to provide equipment for a full-class of students, including computers, air-conditioners, wall-mounted fans and a vacuum cleaner for the upkeep of the facility. By December 2020, the outcome of all the efforts came together and the school authorities were able to start utilising the facilities for the ongoing batch of students.