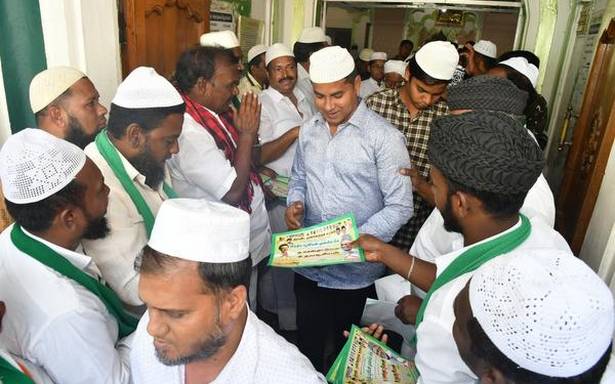 With barely 48 hours left for campaigning to come to an end, political parties are pulling all stops to make the most of the final two days left to convince the voters on who to vote.

The DMK’s Krishnagiri candidate T. Senguttuvan and party cadres visited a mosque and canvassed the votes of Muslims.

On the other hand, the Social Democratic Party of India that has aligned with the AMMK, campaigned for the All India Majlis Ittehadul Muslimeen candidate fielded under the AMMK alliance in the constituency. The SDPI cadres were also seen visiting the mosques after the Friday prayers.

With the Assembly election seen as a make or break for the leading alliances after a 10-year term of the incumbent government, the cadres of two main political alliances are see campaigning with an unseen vigour in the face of the soaring mercury levels.