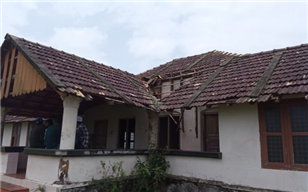 Portion of the heritage building’s roof collapsed in rain

The damage to the tiled roof of the heritage tourist bungalow inside the 400-year-old Bekal Fort here on August 13, barely a day after the caving in of the outer wall of one of the bastions of the fort in heavy rain, has elicited demands for restoration and conservation of the building.

A portion of the roof collapsed in the rain, triggering fears among conservationists and heritage lovers that the entire building built by the British in 1903 is in danger unless restoration measures are taken at the earliest. The iconic building built in traditional architecture is now in the custody of the Bekal Resorts Development Corporation (BRDC), while the fort is under the control of the Archaeological Survey of India (ASI).

“The bungalow having heritage value is in a pathetic condition now and will be ruined if serious efforts are not made to conserve it as a heritage building,” said V. Jayarajan, Indian National Trust for Cultural Heritage regional convener. The structure should be handed over to the Archaeology Department of the State government for conservation works, he added.

Out of 36 acres of the fort, 3.56 acres of land within it including the bungalow and the road leading to the building is vested with the Public Works Department (PWD). Ten years ago, the PWD transferred 20 cents of the land with the building to the Tourism Department, which handed it over to the BRDC. According to local tourism entrepreneurs, the rooms inside the building get waterlogged during rain.

The District Tourism Promotion Council earlier made proposals for renovating the bungalow to convert it into a museum for displaying coins and weapons excavated from the fort by the ASI which are now preserved at the ASI Circle Office in Thrissur. The building can also be used as pay-and-use waiting lounger for elders and differently abled among those visiting the fort. There was also a proposal to make it as a tourist information centre.