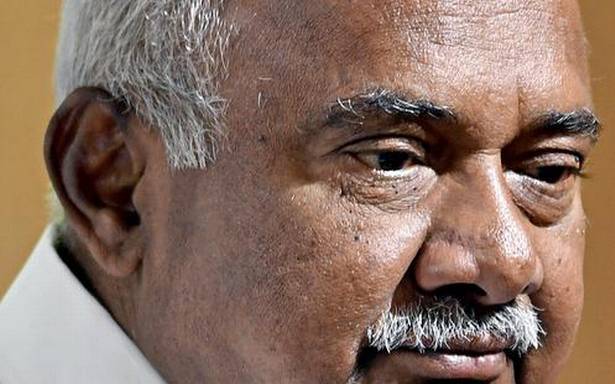 Vishwanath revives plan to step down from the State chief post

As the Congress continues to grapple with dissidence, plans of reshuffling the Cabinet has brought fresh problems to the JD(S) too.

Senior legislators like Basavaraj Horatti, B.M. Farooq, H.K. Kumaraswamy, A.T. Ramaswamy and a few others are aspiring to join the Cabinet. But, the JD(S) has only two vacant posts. When contacted, Mr. Horatti said he was not an aspirant. But, he would accept any responsibility the party offers him. “Had they filled one among the two vacant posts a year ago, I would have served in the field of education and sacrificed it without grumbling,” Mr. Horatti said.

According to sources, upset over the defeat of former Prime Minister and party supremo H.D. Deve Gowda in Tumakuru and owning the responsibility of the party’s poor performance in the Lok Sabha polls, JD(S) State president A.H. Vishwanath has revived his decision to step down. He had expressed the desire earlier, but was persuaded to stay on.

Mr Vishwanath expressed his desire to step down from the position citing health and age. However, he continued in the position, after a lot of persuasion from Mr. Gowda. But the reason according to party sources is; “sidelining and ignoring by party leadership”.

A leader close to him said that Mr. Vishwanath was “frustrated”. Not being included in the Coalition Coordination Committee, and not being consulted during the selection of candidates for Legislative Council for the polls are being cited as the reasons. He is currently in his home town Hunsur and might submit his resignation soon, said the sources.