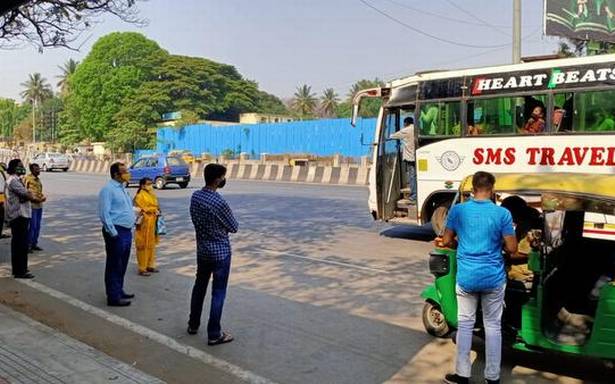 The Road Transport Corporation (RTC) bus strike has been almost complete in the State. Most of the buses are parked in bus depots and have not been taken out at all. Many commuters have been stranded in bus stands across the State.

The State government has allowed private buses and maxicabs to run routes using RTC bus stand facilities. However, the private buses are few and far between and woefully inadequate to handle the commuter load in the state. Commuters have also been complaining of private buses, cabs and autorickshaws fleecing commuters.

"We have to go to work or else lose pay. But we also cannot afford to go in cabs or autorickshaws. Private vans are charging almost three times what they used to regularly," said Suma, a garment worker from Vidyaranyapura.

"I have to go back to my village in Madhugiri, Tumakuru for a medical emergency in the family. Since the strike is said to be indefinite I did not wait and want to get back to my family," said Prashanth Kumar, a carpenter waiting for private bus at Jalahalli Cross.

Transport Department has said the RTCs have issued a rate list for private buses and commuters can lodge complaints if private vehicles are overcharging.

Meanwhile, Kodohalli Chandrashekhar, honorary president, KSRTC Employees League, spearheading the strike, said the employees were firm in their resolve and would not break the strike untill their demands were met even if it meant staying off roads for several months. He blamed the state government for the inconvenience caused to the public. "We had given a 21 day notice to the strike, but the government did not act to resolve the issue. Even now the government is adamant and ruled out negotiations," he said.