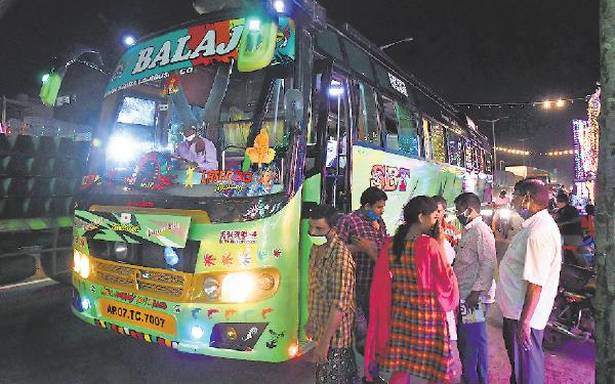 Dasara is around the corner, and no festival is complete without a family get-together. Even as people make travel plans to be with their family and friends for collective merriment, transport operators, primarily those in the private sector, gear up to make a killing by increasing the fares exorbitantly.

A scramble among middle-class families during festivals is commonplace. Trains being the first preference for low-ticket fares compared to buses, the waiting lists get longer, forcing many to find a bus to hop on to and reach their destination. The early birds manage to capture seats in the fleet of buses run by Andhra Pradesh State Road Transport Corporation (APSRTC), the public transport giant that runs special buses during such occasions to clear the extra rush.

The fact that the APSRTC charges 50% extra from passengers travelling by these special buses has been a subject of widespread criticism. “We are forced to choose between the bad and the worse. The additional bus fares charged by the APSRTC defeats the purpose of its motto of public service. One should remember that only people who cannot afford private transport opt for APSRTC services,” says Pallavi Reddy Thamma, a bank employee in Nellore district.

The State transport authorities’ assertion that additional charges on the special buses are imposed out of ‘need’ and not ‘greed’ as these buses are run to cater to the transport needs of the festival crowds in routes with one-way rush has not convinced all. “To recover the cost of the return journey, we are forced to collect additional fares on the 4,000 special buses we are operating this year,” said the Corporation’s Vice-Chairman and Managing Director Ch. Dwaraka Tirumala Rao, at a press conference recently. The public transport authorities also cite the huge revenue losses incurred by the Corporation in the last two years on account of the COVID-19 pandemic, besides the accumulated losses of the past to justify the move.

“This is unequal justice,” said a private bus operator after emerging from a meeting with the Road Transport Authority (RTA) officials who handed out a stern warning against collecting excess fares. The private operators have been told to adhere to the rule book as otherwise their vehicles would be seized and cases would be booked against them.

“It is not true that we are fleecing the passengers. They come to us for quality. We are also in a deep financial crisis, to an extent that many among the fraternity have shut their businesses and digressed to other sectors,” says Ravindra Vadlamudi, owner of a fleet of 21 buses operated under the banner of Ravindra Travels. Talking about two-pronged losses incurred during the ban on operations during lockdown, the private bus operators cite fixed costs such as staff salaries, asset management and payment towards loans as contributing factors to their depleting finances.

New cleaning protocols, additional vehicle cleaning and mandatory personal protective gear such as masks for all drivers and commuters and now, limiting passenger occupancy to less than 50% of capacity and reduction of routes due to limited demand have worsened their woes, they say.

Allegations galore against private bus operators who are often found breaching the norms related to contract and stage carriages and dynamic pricing when there is high demand. “Operating their contract carriages as stage carriages is a perennial issue but strangely the government has done nothing to address it effectively. During festivals and other important occasions, different prices are charged for seats in the same bus, depending on their positioning,” says Vivek Rakoutu, a regular traveler.

The meetings and the warnings are annual rituals. “Strictly speaking, the government does not have any formal control over the fares the private operators collect. It is totally a market-driven business because when they do not have any business, the Government does not compensate them. But at the same time, they cannot be allowed to go too far and exploit the situation,” says an official seeking anonymity. He says the officials dealing with the situation have been told to ensure that the charges collected by private bus operators are on par with the highest rates of the APSRTC buses.

Despite flaws on their part, private buses continue to attract passengers for the comforts they offer. “It’s like choosing comfort over safety,” says Kaushik Nanduri, an engineer from Vijayawada who travels in APSRTC buses on a regular basis.