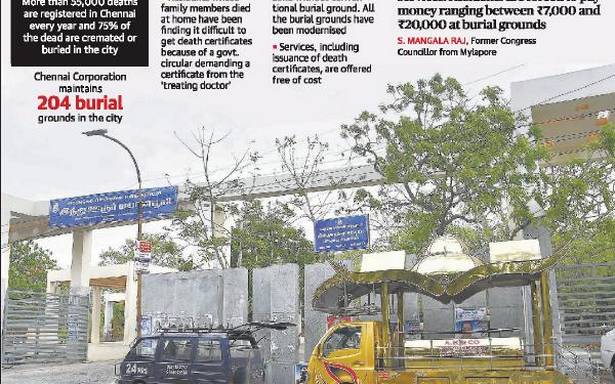 Fleecing by workers, lack of proper facilities and hurdles in obtaining death certificates are some of the problems residents face in the city

Management of burial grounds, maintaining public health in the vicinity of the crematorium and issuance of death certificates on time to residents remain some of the most challenging aspects of local administration in Chennai.

According to data compiled by Chennai Corporation, more than 55,000 deaths are registered in Chennai every year and 75% of the dead are cremated or buried in the city. Others are taken to the native villages for the burial or cremation.

"The Chennai Corporation decided to provide free services in all burial grounds and crematoria on April 13, 2008. But the workers demand money for services. Residents are forced to pay money ranging between ₹7,000 and ₹20,000 at the burial grounds. The civic officials have stopped monitoring the burial grounds in the absence of a council,” said S. Mangala Raj, former Congress Councillor from Mylapore.

A few months ago, Corporation authorities received a complaint about illegal collection of money at a crematorium. After the civic authorities started an inquiry, the person who complained refused to cooperate.

The authorities were unable to prove that the caretaker of the crematorium had collected money for cremation. “We would have suspended the employee. But we were unable to take any action. We did not have evidence,” said an official.

“The water is not clean. Those who take bath on the premises are likely to get infection. The behaviour of workers at the crematorium is arrogant. They demand money. They do not understand the agony of a family that has already spent money at hospitals,” he said.

“There are inadequate burial grounds in Ambattur zone. Modern facilities are needed. Manpower has to improve,” said Mr. Swaminathan.

Of the 21 burial grounds in Ambattur, just one has been modernised. Cremation or burial in the remaining burial grounds are not "encouraged" by the civic authorities, owing to opposition by the residents living close by.

Residents also complained that the Corporation workers do not share the right information on how to obtain death certificates, leading to a delay in getting the certificates.

Residents have demanded the installation of a noticeboard or a banner explaining the entire process of obtaining death certificates on the premises of every burial ground or crematorium.

Pollution from conventional practices of cremating the dead has affected many residential areas. For example, a religious organisation requested the Chennai Corporation to permit the use of wood to cremate the body of a person on the premises of a modernised crematorium in Mylapore, citing traditional practices.

Some residents have also complained about the frequent repair work carried out in the modernised crematoria.

“The crematorium in Nungambakkam is not operational this week. So residents have to go to other areas such as Arumbakkam. Frequent disruption of operations is a challenge,” said former Corporation Council floor leader V. Sukumar Babu.

Chennai Corporation officials claimed that some of the crematoria were shut for maintenance for four or five days. "Only during Cyclone Vardah, many chimneys of the crematoria were broken. They have been repaired," said an official. More than 10 burial grounds have been handed over for maintenance by NGOs. Services in such burial grounds have reportedly improved.

Tiruvottiyur resident T. Arumugam, who is a former MLA, said maintenance of the burial grounds in the added areas have always been poor.

“Corporation has appointed new people who visit burial grounds in areas such as Thalankuppam. But the work is done by those who were traditionally doing it before the merger with the Corporation. The civic workers just watch,” said Mr.Arumugam.