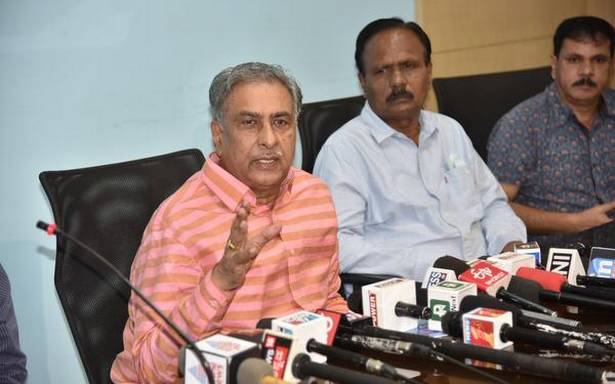 With an objective of creating more awareness on breast cancer, especially among teachers, anganwadi workers and ASHAs, Avva Seva Trust will hold a month-long awareness campaign and screening camp for teachers in Dharwad district.

Addressing presspersons in Hubballi on Wednesday, Chairman of Avva Seva Trust and Chairman of Legislative Council Basavaraj Horatti said that the trust will be conducting the campaign with the assistance of HCG Cancer Centre as it believed that awareness will go a long way in the fight against the disease.

Mr. Horatti said that there are a lot of misconceptions about cancer, particularly breast cancer, even among the educated and it is alarming that among cancer patients, women with breast cancer topped the list.

He said that the breast cancer awareness campaign and screening camp will be formally inaugurated at 10 a.m. on October 10 at R.N. Shetty Kalyan Mantap in Hubballi. During the month-long event, the plan is to cover as many teachers as possible. Thermal screening will be done free. “After Dharwad district, Avva Seva Trust plans to extend the programme to Haveri, Gadag and Uttara Kannada districts,” he said.

CEO of HCG Cancer Hospital Jay Kishan Agiwal said that awareness is important in the fight against cancer as it will help in early detection which subsequently will lead to early start of treatment and cure. “Cancer is curable if diagnosed in the early stages of the disease as advanced medicine and technologies are available now,” he said.

He said that because of awareness, 1.5 crore cases of breast cancer are now being detected every year and the survival rate among breast cancer patients has now increased to 91% in the country. “The objective of the campaign is to sensitise people about life after cancer. Apart from screening, patients using advanced thermal scanner, the HCG Cancer Centre will also help in getting medicine and treatment at subsidised cost by involving pharmaceutical companies,” he said.

Secretary of the trust Shashi Sali listed out the various initiatives of the trust and said that it has reached teachers, anganwadi workers and ASHAs and others through its various activities meant for the welfare of women.