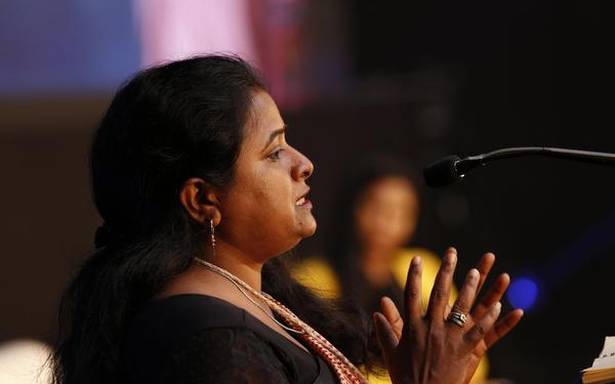 Kavita Devi, co-founder and editor of Khabar Lahariya, a newspaper run by women in Uttar Pradesh, was the star at the plenary session of the second International Conference on Gender Equality (ICGE-II) here on Saturday.

Started in 2002 by a group of homemakers in Chitrakoot in Madhya Pradesh as a small journal, Khabar Lahariya aimed to bring out the plight of villages through its reporters, who were solely local women. On Saturday, the group celebrated the 8th anniversary of its website, while its eight-page broadsheet daily is now making waves across the Hindi belt.

Addressing a session on ‘Challenging gendered power structures in sustainable entrepreneurship and social business’ at ICGE-II on the Gender Park campus, Ms. Devi narrated her story of growth from being a meek house wife in a patriarchal village, Bundelkhand, to an empowered woman.

“When we sought to bring out a journal highlighting the news around, there was ridicule from society. Men said media work cannot be women’s domain. None would reveal to us any news. It was tough initially,” recalled Devi. Slowly, the scenario changed. “We managed to start the paper in a modest way. People got a pleasant surprise on seeing news about their village printed for the first time anywhere,” she noted.

Khabar Lahariya is uncompromising in its attitude, winning both public opposition and applause. “We do face protests against the kind of news we give [on scandals ranging from petty corruption to instances of wife-beating]. As an independent endeavour, we don’t accept grants from anyone, including the government,” said Ms. Devi, reiterating that Bundelkhand in the cusp of Uttar Pradesh and Madhya Pradesh was yet to emerge from its feudal features. Devi, with no formal education and married at the age of 12, is the first Dalit to become a member of the Editors’ Guild of India.

The session was chaired by policy analyst Meera Velayudhan, an advisor to the Gender Park. The other speakers were anthropologist Dolly Kikon (University of Melbourne), inclusion advocate Sophia David, and Priyanka Dutt, the country director of BBC Media Action.

The parallel sessions that followed were on topics such as ‘Social capital’, ‘Sustainability in fashion industry’, and ‘Sustainable entrepreneurship and social business lessons from Kerala’. The concluding session chaired by State Planning Board member Mridul Eapen focused on developing an inclusive policy for sustainable social businesses.