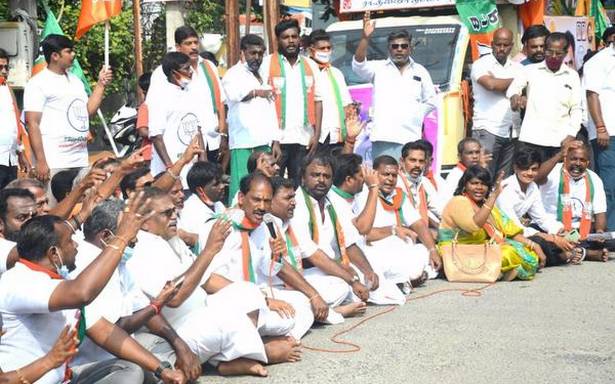 Workers of the Bharatiya Janata Party (BJP) on Monday staged a protest seeking an apology from the Congress government for All India Congress Committee leader Rahul Gandhi’s remarks on a “lack of democracy” in the country.

Incidentally, Prime Minister Narendra Modi during a virtual launch of a health insurance scheme in Jammu and Kashmir responded to Mr Gandhi’s remarks by stating that while Congress leaders preach democracy, the party in Puducherry had no elected local bodies.

Mr. Saminathan said the Congress government had failed to conduct the local body polls despite a directive from the Supreme Court. A party which could not hold local body elections has no right to talk about democracy, he said.