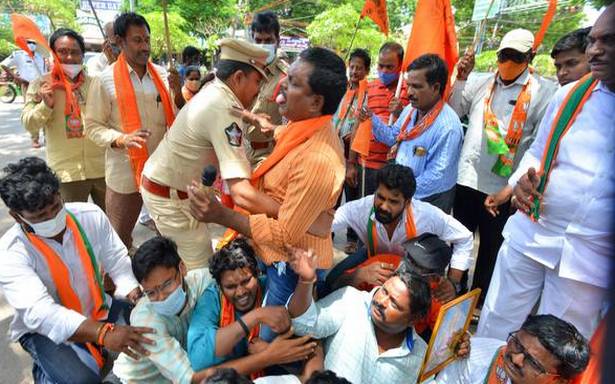 Activists of the Bharatiya Janata Party laid a siege to the Prakasam Bhavan here on Wednesday demanding that the authorities withdraw the restrictions on public celebrations of Ganesh Chaturthi announced to prevent gatherings in public places in view of the threat of a possible third wave of the pandemic.

A high drama was witnessed as the activists, led by its district vice-president Nagendra Kumar, tried to gatecrash into the Collectorate in protest against what they called an “anti-Hindu” Jagan Mohan Reddy government.

It was unfortunate that the YSR Congress Party government had now announced a series of curbs which had not been put in place during the religious festivals of other communities, they said.

“Come what may, we will go ahead with community celebrations despite the curbs by adhering to the COVID safety norms,” asserted BJP leader Chinna Yogaiah Yadav. “When cinema halls are permitted to screen films, it is unfair to ban Ganesh immersion processions,” he opined.

Police had a tough time dispersing the assembled activists of the saffron party who came in a big procession with Ganesh idols to the Church Centre and remained at the closed gates of the Collectorate.