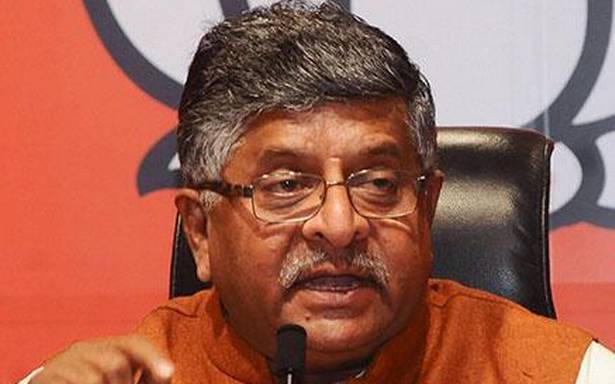 Ravi Shankar Prasad demands that the Congress clarify if it supports these parties or not.

In the run-up to the first-ever District Development Council (DDC) polls in Jammu and Kashmir, the BJP on Monday termed the stance of the parties of the Gupkar alliance on Article 370 and the Tricolor “anti-national” and demanded that the Congress clarify if it supported these parties or not.

At a press conference, Union Law Minister Ravi Shankar Prasad cited a number of pro-people Central laws that have been brought into force in the Union Territory (UT) following the 2019 repeal of Jammu and Kashmir’s special status, and asked if the Congress supports their annulment by bringing back Article 370.

“I want to ask Sonia Gandhi [Congress president] and Rahul Gandhi, do they want restoration of Article 370? Please tell the nation categorically and clearly does the Congress support annulment of pro-people laws,” Mr. Prasad asked. He attacked the People’s Alliance for Gupkar Declaration (PAGD), an amalgamation of various Jammu and Kashmir parties, whose demands have drawn some support from the Congress.

Mr. Prasad pointed to the “anti-national” views of National Conference (NC) leader Dr. Farooq Abdullah, who had favoured China’s support for Article 370 restoration, and People’s Democratic Party (PDP)’s Mehbooba Mufti’s statement that she would not raise the national flag if the separate flag of Jammu and Kashmir is not restored, and sought to know the Congress’s stand over them.

Mr. Prasad said women were earlier deprived of property rights in the UT if they married outside and anti-corruption laws, reservation for the disadvantaged sections of society and various other “humanist” Central laws were not implemented in the region. He accused the Gupkar alliance of working to push Jammu and Kashmir towards “narrow conservatism”.

“If a Muslim or Hindu girl from Jammu and Kashmir married a boy from outside, then she would have no right in the property of her father. We have changed it and restored her right to property,” he observed.

The alliance of about 10 regional parties has demanded the restoration of Article 370, a demand supported by some senior Congress leaders, including P. Chidambaram.