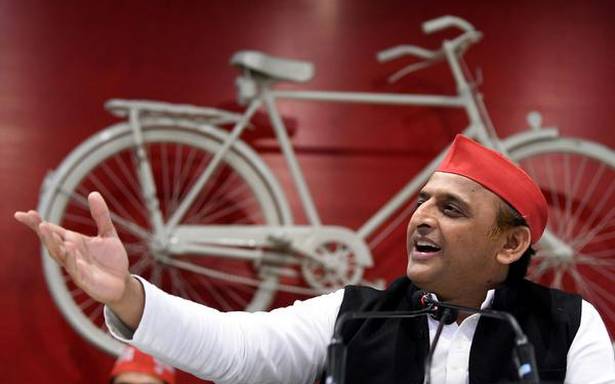 Samajwadi Party president Akhilesh Yadav on Saturday said the legal wing of his party would lodge a police complaint against the BJP’s IT cell in-charge for spreading misinformation about him on social media, linking him to Kannauj perfume trader Piyush Jain whose premises were raided by tax officials recently.

Mr. Yadav said he would get an FIR lodged against Amit Malviya, the BJP’s national information and technology department in-charge, for tweeting a photo of him when he was visiting France in 2015 as Chief Minister for the purpose of setting up a perfume park in Kannauj. While along with Mr. Yadav, his colleague Abhishek Mishra, wife Dimple Yadav and MLC Pushpraj Jain alias Pampi are also present, in his tweet Mr. Malviya insinuated that Piyush Jain was also present with Mr. Yadav.

Mr. Malviya said the photograph featured Mr. Yadav’s businessman friend from whose house stacks of currency notes were recovered from under the floor and from inside the walls.

Mr. Yadav however termed the BJP’s allegations as lies, saying the BJP IT cell in-charge was “lying with the support of the State and Central government”.

Addressing a press conference here, Mr. Yadav also said that if the 2022 Uttar Pradesh Assembly election does indeed have only digital campaigning, he would ask the Election Commission to provide funds to prepare on the digital platform and also appeal to the EC to help parties which have a weak infrastructure.

“We cannot compete with the BJP’s digital infrastructure,” said Mr. Yadav, stressing that in a democratic setup, parties should have an equal platform.