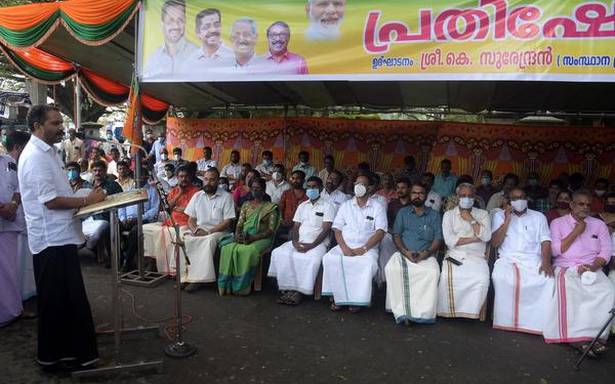 Organisational strengthening with an eye on 2024 LS polls

The Bharatiya Janata Party (BJP) will scale up its organisational strength in the State by doubling the number of constituency committees.

Accordingly, BJP State council members will also double from 140 to 280. The bifurcation of the constituency committees will be on the basis of the civic bodies.

Mr. Surendran said the scaling up was being done with an eye on the 2024 Lok Sabha elections. The new constituency committee presidents would be aged below 45 years and more women would be given opportunities.

“We reached a decision after listening to 12,680 party workers. We want to infuse young blood into the party. The names of 280 presidents can be announced by December 1 or 2,” he said.

Mr. Surendran said the BJP would strengthen its agitation against the proposed K-Rail (SilverLine) by joining hands with the groups which were already on the warpath. The BJP will also launch a campaign against the CPI(M) promoting Islamic extremism. A protest will be staged in all district headquarters on Thursday demanding that the National Investigation Agency (NIA) take over the inquiry into the recent murder of Rashtriya Swayamsevak Sangh (RSS) worker A. Sanjith at Mambaram, near Palakkad.

“We will meet Union Home Minister Amit Shah on Monday and convince him of the necessity for an NIA inquiry,” he said.

According to him, Muslim groups within the CPI(M) and the Congress are creating communal polarisation in the State. Referring to the Union Government readying to roll back three farm Bills, Mr. Surendran challenged the Congress and the CPI(M) to introduce the Mandi system in Kerala.