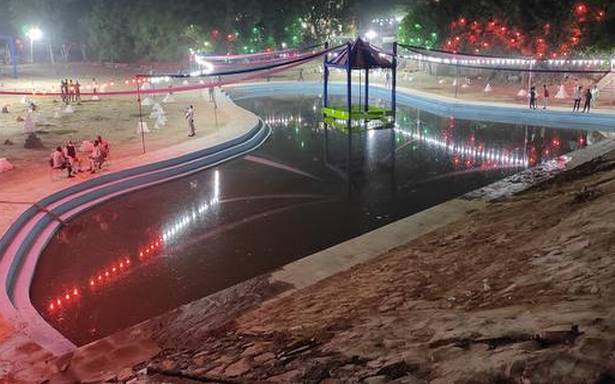 Aam Aadmi Party (AAP) Delhi in-charge and Environment Minister Gopal Rai on Tuesday said that the BJP is busy doing politics over Chhath Puja, while AAP’s Ministers and MLAs have taken charge of preparations for the festival and are visiting ghats.

Mr. Rai inspected the preparations at Bhalswa lake and said that facilities — from tents to CCTV cameras — have been provided at the site. MLA Atishi inspected several Chhath ghats, including Giri Nagar and Tilak Khand.

“Our only wish is to help the people of Delhi, of Purvanchal to celebrate Chhath Puja without obstacles. Amidst the enthusiasm and the preparations, I would also like to urge the people to exercise caution and adhere to COVID-19 guidelines. The role of the BJP is to impose its politics, while the responsibility of AAP is to help conduct the puja. So, they’re doing their part and we are doing ours,” Mr. Rai said.

Meanwhile, north-east Delhi BJP MP Manoj Tiwari accused Chief Minister Arvind Kejriwal of trying to shirk his responsibility for the cleanliness of the Yamuna and blame the Haryana Government for increased ammonia levels.

Mr. Tiwari visited the Najafgarh drain on Tuesday. “I am here to expose the fact that the Yamuna falls prey to pollution not because of water from Haryana but because the Delhi Government did nothing to improve its situation over the past seven years,” he said at a point where water from the Najafgarh drain was falling into the river.

“The Delhi Government has not only been misleading citizens but also the honourable Supreme Court about the efforts to clean the river. The CM is now disrespecting the Purvanchali people by trying to hold them and the Chhath festival responsible for the polluted Yamuna,” he added.