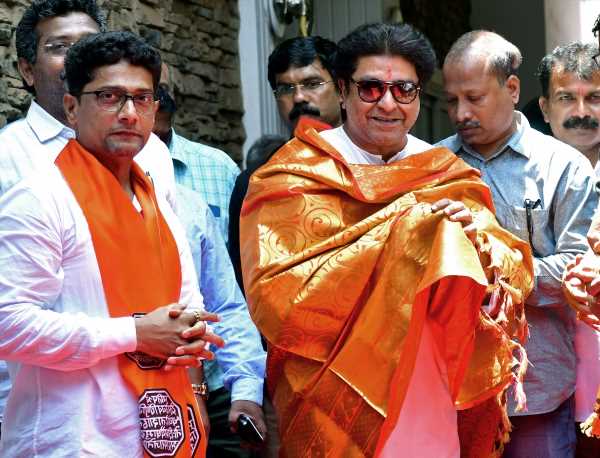 ‘Raj Thackeray’s political outfit will soon fold up in Maharashtra.’

Bharatiya Janata Party MP Brijbhushan Sharan Singh in a no holds barred two-part interview to Prasanna D Zore/Rediff.com reveals why he is seeking an apology from Maharashtra Navnirman Sena President Raj Thackeray who has planned a visit to the Ram Janmabhoomi in Ayodhya on June 5.

Singh is also president of the Wrestling Federation of India and a six-time Lok Sabha MP.

“Nobody can get Raj Thackeray into Ayodhya. He won’t even be able to get out of the airport. Forget about Ayodhya, I will not let him come out of the airport,” declares Singh, the BJP MP from Kaiserganj in UP.

Why did you give an ultimatum to Raj Thackeray and do you stand by it?

I still stand by my ultimatum and will continue to stand by it till Raj Thackeray apologises to the people of north India.

Nobody can stop me from stopping him from coming to Ayodhya.

Forget about Ayodhya, I will not let him come out of the airport.

What do you have in mind to stop him from entering Uttar Pradesh? Isn’t that his fundamental right?

Wouldn’t that lead to a law and order problem for the Yogi Adityanath government in UP?

It doesn’t matter to me. I will not climb down from my position for anybody. I will continue to obstruct his (Raj Thackeray) passage into UP and Ayodhya till the time he doesn’t express regret for his actions (the MNS assaulted north Indians in Mumbai and parts of Maharashtra early on in the party’s existence).

Either he apologises or say publicly that he has not made any mistake (by attacking north Indians in Maharashttra). Or let him say that what happened in the past was a mistake, apologise for it, and assure that north Indians will never be targeted in Maharashtra by his party.

If he doesn’t say this, then nobody can get him into Uttar Pradesh or Ayodhya. Nobody can dare to do that till I am around.

Isn’t there a likelihood of Yogi Adityanath welcoming him to Ayodhya?

Arre bhaiyya kisi main itna dum nahi hai. Koi nahi kar sakta. Koi nahi la sakta (Listen brother, nobody has the guts to do that. Nobody can get Raj Thackeray into Ayodhya). He won’t even be able to get out of the airport.

You are a BJP MP and according to the ruling parties in Maharashtra, your party in the state is giving tacit support to Raj Thackeray.

In Maharashtra his political opponents claim that Raj Thackeray is executing the BJP’s agenda with his loudspeaker agitation and here you are daring him to enter UP. Why?

Arre, mera us-se koi lena-dena nahi hai (I have got nothing to do with his loudspeaker agitation).

My only contention is at least a person who comes from the land of Chhatrapati Shivaji Maharaj, who challenged Aurangzeb, and the land of the heroic Marathas who challenged the might of the British, should have never indulged in creating a rift between Hindus for political gains. We all know what he (Thackeray) has done (to north Indians in the state).

Aren’t you putting your party in a tight spot with such a demand?

Mera ek line ka lena-dena hai (I want him to issue a one-line apology). Maafi maango aur UP aao (Apolgise to the people of north India and come to UP).

You also tweeted asking the UP chief minister to seek an apology from Raj Thackeray. Will he heed your request?

Mere ko kya lena-dena hai bhai? Maafi mango, aur aao (It makes no difference to what Yogi Adityanath does. My only contention is Raj Thackeray should apologise and he is welcome).

Koi la nahi payega. Aap meri baat ko samjho. (Nobody can succeed in bringing Raj Thackeray to UP. You try to understand what I am saying). Don’t put words in my mouth.

I am not putting words in your mouth, but wouldn’t you be going against your party if the BJP in UP wants to welcome Raj Thackeray in Ayodhya? Raj Thackeray has been praising the UP chief minister for development he has brought into UP and getting loudspeakers off religious places.

First of all, I am a bhakt of Bhagwan Ram. The whole country is a devotee of Lord Ram. Everybody worships Lord Ram: A Maratha (Maharashtrian) or a north Indian.

If this is an issue of Hindus worshipping Lord Ram, then why are you opposing another Hindu from entering Ayodhya?

So, you don’t consider Raj Thackeray a Hindu?

Bahurupiya hai woh (He is an impostor). He has become a Hindu for selfish interest.

Ever since I dared him to enter UP I have been getting threatening calls from Maharashtra. Yesterday (May 6), somebody called me and said that 65 per cent crimes in Maharashtra are committed by the people of UP and Bihar. I told him let the law deal with such criminals.

In an interview to a Marathi TV channel today (May 7) some MNS functionary said that with my apology demand I was creating more trouble for people of north India in the state. I told him that you have been doing that since long and that is what your character is.

My point is if you have really transformed yourself and become a true Hindu, then please apologise for beating up fellow Hindus. And also assure that you won’t attack your Hindu brothers again in the future.

When do you think politicians will stop using regionalism or religion for political gains?

But Raj Thackeray’s political opponents are saying he is riding piggyback on the BJP’s shoulders to defeat the Shiv Sena in Mumbai and the Maha Vikas Aghadi in the state?

Nobody from (Maharashtra or UP) BJP has yet informed me that that is what they are doing. And I have got nothing to do with what you say the Opposition in Maharashtra is charging the BJP with.

05/09/2022 India Comments Off on BJP MP: ‘Raj Thackeray has become a Hindu for selfish interest’
India