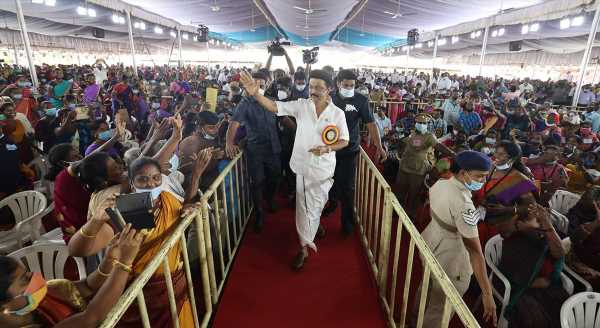 It is increasingly clear that for the BJP to try and establish itself as an electoral force in Tamil Nadu, the party has to come out of the old Brahminical mould, observes N Sathiya Moorthy. 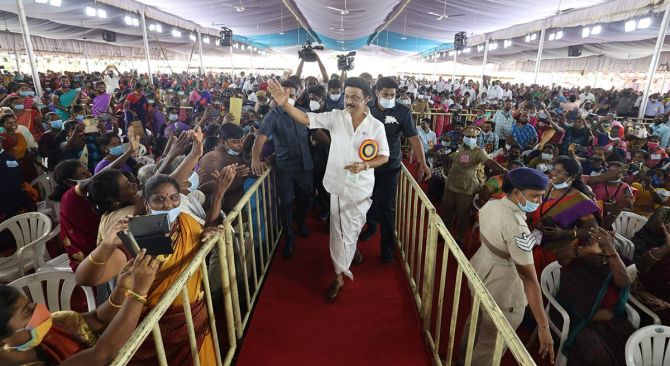 Despite Tamil Nadu BJP president K Annamalai’s vigorous campaign to paint the ruling DMK as ‘anti-Hindu’, the party may be losing a sizable chunk of the less than three per cent committed ‘Hindutva votes’ to the very same party in future elections. This is apart from the tradition of BJP voters going the anti-DMK AIADMK way especially in state assembly polls when the late chief minister Jayalalithaa was at the helm.

The AIADMK did not have to face a test to its testing its independent electoral strength in the post-Jaya parliamentary polls of 2019 and the state assembly elections earlier this year. In the company of the ruling AIADMK under the twin leadership of then chief minister Edappadi K Palaniswami (EPS) and deputy CM O Panneerselvam (OPS), the BJP secured the highest number of four seats in the assembly even while the rival DMK swept back to power after a 10-year hiatus.

In Elections-2019, the BJP-NDA won only one of the 39 Lok Sabha seats, when the AIADMK’s P Ravindranath Kumar, OPS’s son, was returned from Theni. The DMK alliance swept the rest, all but one of them by huge margins.

For the BJP, the party lost the traditional stronghold of the Kanyakumari Lok Sabha seat, twice in as many years, after H Vasanthakumar and his son Vijay Vasanth successively defeated the BJP’s Pon Radhakrishnan, first in the 2019 elections and later in a by-election earlier this year after the father became the first parliamentarian in the country to succumb to the pandemic.

Radhakrishnan was a Union minister and local MP when he lost in 2019. His party had the solace of reducing the rival Congress’s victory margin from a record 2.6 lakhs to 1.38 lakh votes, still the second highest margin.

Radhakrishnan had bagged the seat in 2014 by defeating Vasanthakumar, Sr, by 1.29 lakh votes, when it was a multi-cornered contest with the ruling AIADMK winning 37 of the 39 Lok Sabha seats and the DMK drawing a blank.

Today, the BJP’s concern in a state, where it had initially hoped to replace the two Dravidian majors after the successive deaths of Jayalalithaa (2016) and her DMK rival, M Karunanidhi (2018). Instead, it is about retaining even the slender vote-share it has polled whenever it had contested legislative polls in the state on its own, or in the company of minor allies.

In the normal course, a share of the BJP’s traditional vote-bank, mostly the state’s anti-DMK Brahmin community, tended to vote for the AIADMK in assembly polls, to the exclusion of the national party.

Their idea was to vote for a party that could defeat the ‘anti-god, anti-Hindu, anti-Brahmin’ DMK, as their perception went, and not necessarily to the BJP, per se. In the Lok Sabha polls, they would go back to the BJP even when they knew that the party would not win too many seats in the state, owing to the divided Dravidian monopoly.

There may be a change in the voting pattern of traditional BJP supporters, or a substantial number of them, in the aftermath of DMK Chief Minister M K Stalin’s government initiating pro-active pro-temple initiatives, going beyond those attempted by Jaya in her time.

Jaya was a Brahmin herself, and a part of her government initiatives of the kind was attributed to her personal beliefs as much in god as in astrology, which the rationalist Dravidian hardcore had ridiculed from the days of ‘Periyar’ E V Ramaswamy Naicker.

Thus, the Jaya government initiating annadhanam, or free meals scheme to the poor, in all government-owned Hindu temples across the state. Later, she helped extent the mission to churches and mosques as well, but not with the same success rate. That also owed to the fact that most traditional and popular temples in the state are still owned and run by the state government.

In his time, Karunanidhi too had done it, before and after Jaya, naming the scheme instead as sama-pandhi bojanam, or egalitarian food-sharing scheme. Under the scheme, all poor people, including those from the upper caste Brahmin community, were encouraged to partake of food together, with Hindu temples under the government playing the host.

More pointedly, Jayalalithaa through her last innings as chief minister (2011-2016) had initiated a scheme to try and retrieve large acrage of temple properties and long-due rentals from lessees and sub-lessees.

She started with a naming-and-shaming game, by putting out the names of tenants with high dues in prominently displayed notice-boards on respective temple premises. That produced some initial results, but got stalled in due course, especially after her hospitalisation and death after returning to power in 2016.

It is here, the non-believer in Stalin has scored.

Possibly egged on by wife Durga, as staunch believer as Jayalalithaa, Stalin as CM had deputed P K Sekarbabu, the minister for Hindu Religious and Charitable Endowments, to go after defaulters as much as possible.

According to former AIADMK minister Ma Foi K Pandiarajan, Sekarbabu has been able to retrieve 2,000 acres of temple lands this way. Lakhs of acreage of land and built-up property, and crores of rupees in rental dues, even when the rents were far below market rates, required to be realised, but there is a general appreciation of the minister’s drive and Stalin’s unacknowledged blessings for the same.

The initiative is seen as a part of Stalin’s efforts to improve the system overall, since becoming chief minister in May.

While traditionalists were still peeved, the affected priests and their families heaved a sigh when the government clarified that none of them would be rendered jobless but only re-located.

The state has had a centuries-old tradition of hereditary non-Brahmin pujaris trained in centuries-old local Saiviite and Vaishnaviite methods of performing temple and other religious rituals to the exclusion of Brahminical Vedic practices.

A majority of the population are Hindus, and believers at that. In a state where Periyar’s black shirt movement is being overwhelmed a thousands of times by the attire of the pilgrims to the Sabarimala Ayyappan shrine in neighbouring Kerala, but that has not reflected the voting pattern in the state.

God and religion have not been a major poll-issue in Periyar bhoomi, as both supporters and critics alike keep propagating since the thirties and forties of the previous century. There are pointers to this prognosis. The western region returned to the AIADMK fold — despite the Coimbatore serial blasts (1998), targeting BJP leader L K Advani on poll-eve — bringing in electoral advantages to the party, but it could not keep it.

Both in the 1998 and 1999 Lok Sabha polls, the prevailing public image of the Vajpayee-Advani duo did add 5-6 per cent additional votes respectively to the AIADMK and DMK alliances, of which the BJP was a part, over and about the party’s known 2-3 per cent vote-share.

Again, the voters did not stick with the BJP. Worse still, AIADMK leaders point to Amma sweeping the BJP-NDA off its feet in Elections 2014, when the ‘Modi magic’ was working already elsewhere in the country. They have since been blaming the BJP ally’s ‘anti-minority’ image for the party losing even traditional, non-minority votes, leading to a complete rout. In private, DMK sources point Stalin’s political tact in letting big government temples in the state to telecast live Prime Minister Narendra Modi’s religion-centric events in Kedarnath and Varanasi in recent weeks. Local BJP leaders are not turning up for the ‘community TV programmes’. But if the state government had denied permission, the BJP leadership would have make a political issue out of it, seeking to paint Stalin, his party and his government ‘anti-national’, as the Hindutva brigade has been wont to do elsewhere in the country on even more trivial issues.

At the same time, DMK sources also point to the way, Annamalai in particular is exploiting such occasions politically to criticise the DMK government at impromptu news conferences organised at the conclusion of the prime minister’s telecast.

This, they point, out may force the state government to reconsider such permission being granted for such telecasts, especially as news reports on the event give greater prominence to what otherwise is a political statement from the state BJP chief.

It is thus becoming increasingly clear that for the BJP to try and establish itself as an electoral force in the state as different from a political force, which it is, the party has to come out of the old Brahminical mould, which successive state leaderships of past decades, now leading up to Annamalai’s era, commencing July this year, have been promoting unsuccessfully.

They need to acknowledge that traditional Brahminical voters would stick with the party even without the BJP basing its main politico-electoral agenda in a century-old Periyar past, which was not valid even then, though it was not around at the time.

Before Annamalai, his predecessor, L Murugan, now a Union minister, launched the imaginative Vel Yatra to the Aaru-padai Veedu temples of Lord Murugan, situated in six locations across the state.

It was to condemn little-known self-styled Periyariite ‘Karuppar Kootam‘ who demeaned the 19th century devotional song, Kanda Sashti Kavasam in Tamil. At the end, the campaign gave free publicity to the former without bringing in any additional votes to the BJP.

Similar was the fate of an earlier campaign against Tamil film lyricist and poet, Vairamuthu, following his observations on the birth of Sri Andal, the eighth century saint-poetess, the only woman to be among the celebrated 12 Alwars of the Tamil-Vaishnaviite sect.

Vairamuthu was admired by Karunanidhi for his linguistic prowess and got identified with the DMK, also because of his pro-Karunanidhi speeches, whenever an opportunity presented itself.

The protests, by the mostly Vaishnaviite-Brahmin community died a natural death after peripheral Periyariite groups began launching counter-protests, alleging that the other group had insulted the Dalit community. For Vairamuthu had alluded, citing an American scholar, that Sri Andal might have been born Dalit, and not Brahmin as was brought up.

Not only did the protest bring additional votes to the pro-Hindutva BJP in Elections-2019 even when party leaders had identified with the anti-Vairamuthu protests that were supposedly community-centric.

Instead, it exposed the ingrained sectarian distance — once a deep divide — between Vaishnaviite and Saivaiite Brahmins, as few of the latter were seen in the anti-Vairamuthu protests that went on for a few weeks.