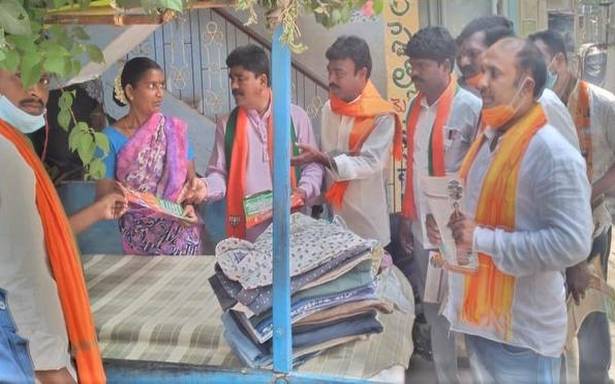 After highlighting the developmental projects sanctioned by the Centre to Tirupati in the last few days, the BJP has extended its narrative now to focus on “rowdyism” and “misuse of official machinery in the State.”

Sunil Deodhar, the party’s co- in-charge for the State, raised the issue at a media conference here on Wednesday, when he said the BJP and the Jana Sena Party combine would join hands to fight against the “rowdy rajyam” in the State.

Since the JSP candidates were prevented from filing nominations and roughed up in the recent municipal elections, the alliance partner had extended its support to the system that would prevent ruffian elements from becoming a part of the administration.

Claiming people’s overwhelming support to the BJP in its fight against the “Goonda Raj” in West Bengal and Tripura, Mr. Deodhar maintained that only the BJP and the Jana Sena Party could fight the “rowdy elements, redsanders smuggling mafia and conversion mafia” in the State.

On the YSRCP bringing a Cabinet Minister to every Assembly segment forming part of the Tirupati Lok Sabha constituency, BJP State president Somu Veerraju wondered as to why the ruling party needed a star-studded campaign if it was confident that its welfare schemes would fetch votes.

He said the Navaratnalu remained tall promises. “Andhra Pradesh is witnessing a state of emergency, though in an apparent democratic format, where the official and police machinery are in the tight grip of the rulers. We will shatter YSRCP’s domination from the Tirupati byelection,” he said.

Meanwhile, the party continued its campaign with the tag line ‘Gunde Gundeki BJP’ (BJP to every heart), wherein the party workers sought support for their candidate K. Ratna Prabha.