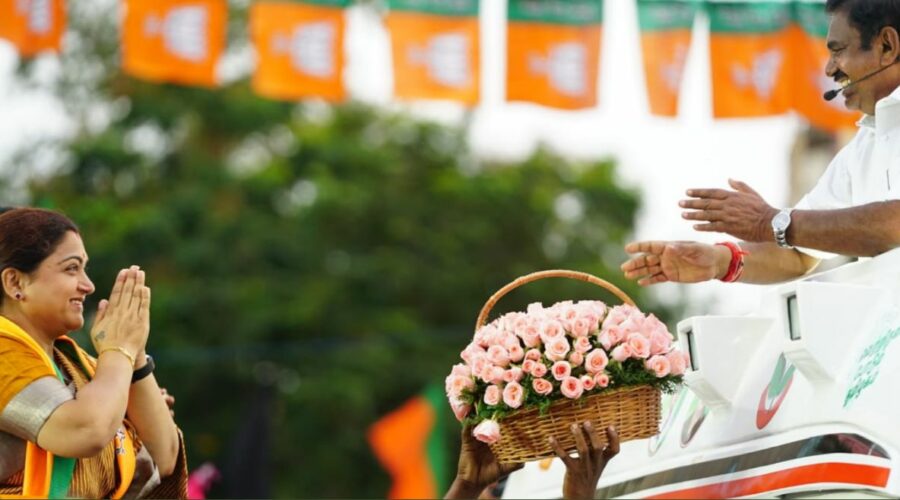 According to field information, state ministers, AIADMK candidates and campaigners are asking BJP cadres accompanying them not to carry party flags at common rallies and also avoid their saffron shawl on those occasions. BJP cadres are also asked to stay out of the common campaign when it enters a minority-dominated areas, especially of Muslims, and re-join later, says N Sathiya Moorthy. 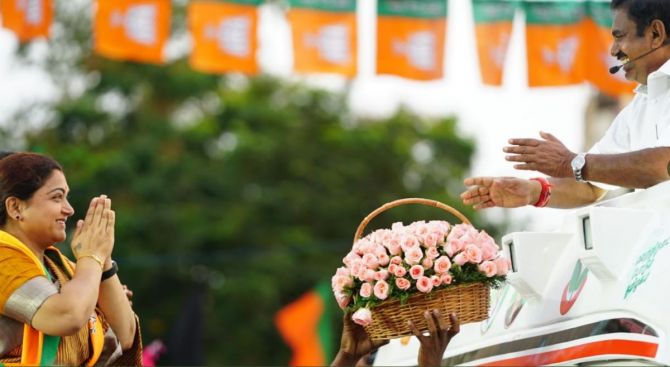 Even as the countdown is underway for the April 6, single-phase assembly polls in Tamil Nadu, a peculiar ground situation is discernible in the case of candidates belonging to the ruling Bharatiya Janata party at the Centre and its counterpart All India Anna Dravida Munnetra Kazhagam alliance-leader in the state, who are cautiously keeping the pictures of Prime Minister Narendra Modi from their campaign material.

Instead, even BJP candidates are claiming to have been “blessed by Amma”, a reference to late AIADMK supremo Jayalalithaa. As the wit quipped, they have at least spared AIADMK founder MG Ramachandran!

The big names that have kept out Modi’s pictures and references to Union Home Minister Amit Shah, the BJP’s strategist par excellence at the national level, include the state party chief L Murugan (Dharapuram), vice president A Annamalai (Aravakurichi), who quit IPS at a  young age to serve the people better, and BJP Mahila Morcha national head Vanathi Srinivasan who takes on actor-politician Kamal Haasan (Coimbatore South), among others.

That way, only the BJP’s actor-politician and party-hopper Khushbu Sundar (Thousand Lights) and party veteran H Raja (Sivaganga) could claim that Jayalalithaa had known them. The other exception is Nainar Nagendran, one-time Jaya confidant and ministerial colleague in her first term as chief minister (1991-96), who is contesting from native Tirunelveli seat. In the disastrous 2019 Lok Sabha polls, the party fielded him from Ramanathapuram, as an ‘outsider’, and lost by a relatively low 1.27-lakh vote margin.

It does not stop here, though. According to field information, state ministers, AIADMK candidates and campaigners are asking BJP cadres accompanying them not to carry party flags at common rallies and also avoid their saffron shawl on those occasions. BJP cadres are also asked to stay out of the common campaign when it enters a minority-dominated areas, especially of Muslims, and re-join later.

There is little that the BJP state or national leadership is doing by way of registering their protest. The claim is that they needed to win seats first and establish the party in whatever way possible, before showing both friends and foes who they are, as elsewhere in the country, wherever the BJP had ‘sneaked in’ via a back-door entry, one way or the other.

The fact is that both AIADMK leadership and cadres alike are agreed that carrying the BJP on their shoulders will be a political burden for them in this election as in the 2019 Lok Sabha polls. As they recall, in the LS polls, the BJP lost very badly even in their traditional strongholds like Coimbatore and Kanyakumari.

It may be conceded that the AIADMK cadres and voters too deserted BJP candidate C P Radhakrishnan in Coimbatore, where he lost by a three-lakh vote margin against the theoretical possibility of five-lakh vote-victory. The AIADMK strategists point out how in Kanyakumari, where their presence remains negligible, incumbent Union minister Pon Radhakrishnan lost the ‘BJP seat’ by a record 2.6-lakh votes.

Pon Radhakrishnan is now contesting the seat in a by-poll caused by the Covid death of H Vasanthakumar, whose son Vasanth Vijayakumar, the 37-year-old political novice, is the rival Congress candidate, backed by the DMK-led alliance.

Fair enough, the BJP is using the Modi-Shah imagery to the hilt in the constituency. However, Pon R, or Ponnar as he is being popularly referred to, has been reassuring local fishermen voters, mostly belonging to the minority Roman Catholic community, that the was ready to dump the much-touted, big-ticket Colachel Container Port in the sea, after it had purportedly contributed to his massive defeat last time. The party is also relying on the hopes of Pon R being re-inducted into the Modi ministry at the Centre, if elected, as his USP this time.

For all this, however, the AIADMK alliance has possible help coming from the rival camp. DMK’s controversial former Union minister A Raja, in charge of the party’s Chennai City campaign, put both his feet into his mouth, by making unbecoming references to the late mother of Chief Minister Edappadi K Palaniswami, EPS. Thavasammal passed away in October last, and references to her in local newspapers and TV channels are still fresh in voter-memory.

As if it were not enough, every organisation associated with the AIADMK-BJP combine staged impromptu street protests across the state, burning Raja’s effigy. Other partners in the alliance, including the PMK and the TMC, too, have condemned Raja. EPS himself began using the material to bolster his sagging campaign-point, that women in the state would not be safe under a DMK government.

Raja and the DMK had got a reprieve only a couple of days earlier, after the Delhi high court adjourned till May, the CBI’s appeal against a lower court acquitting Raja and party MP, Kanimozhi Karunanidhi, in the 2-G scam case, which had helped the Modi bandwagon to romp home in the 2014 Lok Sabha polls. In a bid at damage control, both DMK chief Stalin and women wing’s leader Kanimozhi, who is also Stalin’s half-sister, have condemned such ‘heat of the moment’ campaign behaviour.

After EPS shed tears in a couple of campaign speeches in Chennai City, otherwise a DMK stronghold, Raja too went on the backfoot, and apologised to the chief minister. At a news conference in Udhagamandalam, part of his Lok Sabha seat Nilgiris, he qualified his apology by expanding it to say, “If it is not political, and if the chief minister is really hurt, I apologise…” But the Election Commission will have none of it, and has found him guilty of violation of the model code of conduct.

All of it looked too little, too late. How far such statements, which prima facie read half-hearted, will help reverse the mood of sections, especially of non-committed and undecided voters who take a serious view of Raja’s comments, remains to be seen. For starters, they were still recovering from the jolt of a scam that 2-G inflicted on their conscience when it did, and time alone has helped minimise the impact over the past years.

What more, the AIADMK’s social media campaign, coupled with the open poll-time statements of EPS and other AIADMK leaders, have sought to paint the DMK rival in all black on the law and order front, starting with women’s safety. It was their way of seeking to deflect the DMK’s continuing campaign on the ‘Pollachi sex scandal’, where the son of a senior AIADMK leader holding a responsible position was charged with raping dozens of girls along with his friends, and video-graphing it and seeking further sexual favours at call, by threatening to leak the clippings.

Yet, the Raja diatribe is not a game-changer, especially now that his apology may have ended the controversy a week before the polling day — but the shutting out of Modi from the poll campaign can be. But it can convince the voters if and only if the AIADMK leadership is able to convince the voters that they are also capable of standing up against the Centre on issues of interest and concern to the state and its people.

The DMK has an advantage on this score. Despite both the DMK and the AIADMK resorting to mud-slinging, blaming the other for NEET, early Jallikattu ban, etc, the ruling party has not been able to convince the voter that they are serious about obtaining exemption for the common exam for medical admission, and also work for CAA’s withdrawal.

What is more, in recent days and weeks, the DMK seems to have been able to convince at least a section of the cat-on-the-wall anti-establishment voters, that actor-politician Seeman’s Naam Tamilar Katchi was only a B-Team of the AIADMK-BJP combine. The NTK had polled a substantial 3.8 per cent vote in the LS polls, and had hoped to increase the tally and possibly win a couple of seats from the all 234 that they are contesting.

The DMK had also sought to paint Kamal Haasan’s Makkal Needhi Maiam likewise. Alongside the NTK, the MNM too was targeting only the DMK on issues earlier. But lately, Kamal is distributing the blame for multiple failures of the state and the central governments on the two Dravidian majors nearer home, and their national, BJP and Congress, allies in distant Delhi.

Seeman, however, sticks to his guns, arguing that he was only targeting the real source of Tamils’ troubles, on NEET, Jallikattu, Cauvery water dispute, CAA — and of course, the Sri Lankan Tamil issue, which he says is always the closest to his heart.