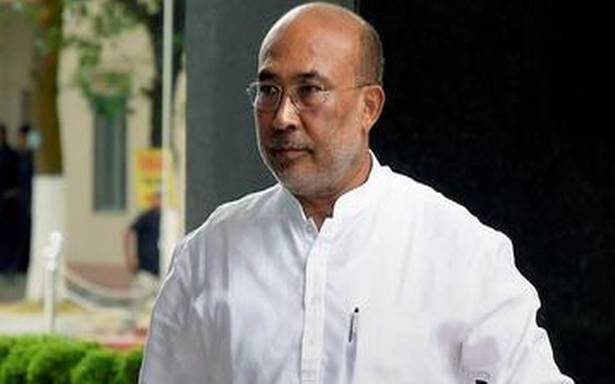 At a function in Imphal, he alleged that democracy had been trampled in West Bengal. He was referring to the pre and post election violence in the State.

West Bengal ruling party Trinamool Congress (TMC) is a coalition partner in Manipur. In the 2017 polls, it secured one seat and the MLA, Tongbram Rameswor, extended support to the BJP when Mr. Biren staked his claim to form the government. Mr. Biren had appointed Rameswor the chairman of the Planning and Development Authority. TMC chief and West Bengal Chief Minister had reacted saying, “He did not take our permission to do so”.

In the 60-member Assembly the Chief Minister is allowed to have a 12-member council of ministers.

All the four MLAs of the National People’s Party (NPP), who had extended support to the BJP in ministry formation, were made Ministers, much to the chagrin of the Naga People’s Front, whose four MLAs had also supported the BJP. However, Mr. Biren divested all important portfolios, including Finance, of the NPP Ministers, including Deputy Chief Minister Yumnam Joykumar, who reportedly used unparliamentary words while referring to him.

It was some months later, after the intervention of NPP national president Conard Sangma that two NPP Ministers got back their portfolios and the other two MLAs were dropped. Mr. Biren retained Health, which was with NPP L. Jayentakumar. There have been demands from some sections, including BJP MLA and spokesperson K. Joykishan, to allot it to someone to fight COVID-19 since Mr. Biren holds many portfolios.