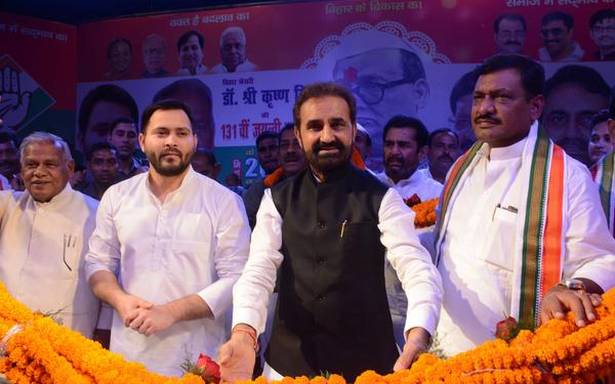 Senior Congress party leader and party in-charge of Bihar Shaktisinh Gohil on Tuesday urged party high command to relieve him from the post as soon as possible.

“Due to personal reasons, I have requested our Party High Command to allocate me lighter work for the next few months and to relieve me ASAP as#Bihar incharge,” Mr. Gohil tweeted on Tuesday.

Ruling NDA leaders were quick to react. “Mr. Gohil’s tweet proves that Congress party runs on social media. The party is yet to get over the crushing defeat in the last assembly elections, winning just 19 seats out of 70 contested,” mocked BJP leader and party spokesperson Nikhil Anand.

However, State Congress party leaders said, “Mr. Gohil tested COVID-19 positive and has not fully recovered yet.” The leader had not visited Bihar since November first week.

After the poll result, senior party leaders like State in-charge Shaktisinh Gohil and others were accused by some party leaders of selling party tickets and making the State unit faction-ridden.

Alliance partner RJD leader and party spokesperson Mrityunjay Tiwari wondered, “What’s wrong if Mr. Gohil has urged top party leadership to relieve him from the post for a lighter work, as we all know he has not been keeping well for sometime. Why his tweet is causing pain in the stomach for BJP-JD(U)?”

Earlier, senior RJD leader Shivanand Tiwari had taken on Congress leader Rahul Gandhi for not taking Bihar election seriously and treating it like a “picnic”.

01/05/2021 India Comments Off on Bihar Cong. in-charge urges wants to be relieved from post
TV & Movies