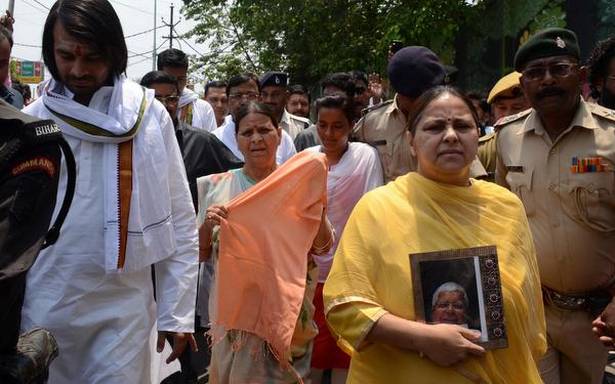 Lalu Prasad’s eldest daughter Misa Bharti and elder son Tej Pratap Yadav were left out of the RJD star campaigners’ list released on October 7 for the upcoming by-elections to a couple of assembly seats in Bihar.

The development is being seen as further sidelining of the elder siblings in the party founded and headed by the father who has made little secret of his preference for younger son Tejashwi Prasad Yadav.

The list, signed by the party’s principal national secretary general Abdul Bari Siddiqui, comprises 20 names, including Lalu Prasad himself who is now out of jail and, if his health permits, can canvass for his party’s candidates for Tarapur and Kusheshwar Asthan.

Another notable omission is that of his wife and former Chief Minister Rabri Devi, a demure housewife-turned-politician who has of late seemed more content playing the role of a matriarch in the family that often betrays hints of being torn apart by competing ambitions of her children.

RJD sources, however, asserted that much should not be read into the development since even those not figuring among "star campaigners" do happen to canvass for the party, provided the candidate in the fray is willing to foot the expenses.

Nonetheless, the BJP, which is now the RJD’s principal rival in the state, latched on the opportunity.

"It is a clear signal to both Tej Pratap Yadav and Misa Bharti that they are no longer desired in the RJD and they must fend for themselves. Mr. Tej Pratap has already floated his own organization while Ms. Misa, a Rajya Sabha member, looks unlikely to be considered for another term," state BJP spokesperson Nikhil Anand said in a statement.

The Congress, which has been left in a daze by the RJD’s unilateral announcement of candidates for Tarapur and Kusheshwar Asthan, also appeared to be hopeful of getting something out of the dynamics of the family that controls its senior ally.

Ashok Ram, who had contested the reserved Kusheshwar Asthan seat in assembly polls last year and whose son Atirek is the candidate for the bypoll, was quoted in a section of the press as saying that he will try to rope in Mr. Tej Pratap for the Congress campaign.

Meanwhile, the Left Front which has been livid over former JNU student leader Kanhaiya Kumar switching over to the Congress, has announced its full support to the RJD in the upcoming bypolls.

The CPI(ML) Liberation, the CPI and the CPI(M) together have about 20 MLAs and, along with the Congress, these are a part of the five-party Grand Alliance helmed by the RJD.

Chief Minister Nitish Kumar, whose JD(U) had won both seats in the assembly polls, was asked about his take on the infighting in the opposition camp.

"It is for you journalists to analyse," quipped Mr. Kumar with a smile on his lips betraying his glee.

The JD(U) has announced its candidates for both seats, which it seeks to retain with the full backing of BJP and smaller NDA partners Hindustani Awam Morcha and Vikassheel Insaan Party.

Voting is to take place on October 30 and the counting will be held on November 2.