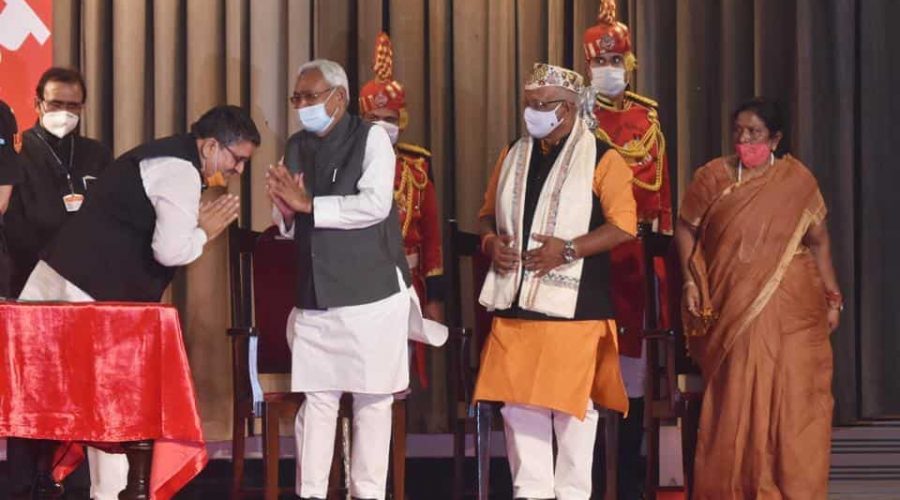 Newly appointed Bihar deputy chief minister Tarkishore Prasad was given finance and five other portfolios that were held by his predecessor Sushil Kumar Modi in a notification about the allotment of ministries issued by Raj Bhawan in Patna on Tuesday.

Chief minister Nitish Kumar retained the home, general administration, vigilance and a clutch of other portfolios. Deputy CM Renu Devi was given the portfolios of panchayati raj, other backward classes and extremely backward classes, and industries.

Prasad was given finance, commercial tax, environment, forestry and climate change and information technology, all of which were previously held by Modi. In addition, he will also hold the disaster management and urban development portfolios. The urban development department was with Bharatiya Janata Party minister Suresh Kumar Sharma, who lost the election from Muzaffarpur.

Kumar took oath for his fourth consecutive term as chief minister on Monday. Devi and Prasad, both BJP leaders, replaced Modi, who was deputy CM for 11 years. Along with them, 12 ministers — five from BJP, five from Janata Dal (United) and one each from Hindustani Awam Morcha-Secular and Vikassheel Insaan Party — were sworn in.

The new cabinet met for the first time on Tuesday and cleared a proposal to convene the first session of the assembly and legislative council from November 23 to November 27, minister Amarendra Pratap Singh of the BJP said.

In the distribution of portfolios, Mangal Pandey was retained as the health minister. He will also hold charge of art, culture and youth affairs, and road construction departments.

The previous road construction department minister Nand Kishore Yadav, who was not made a minister but is widely expected to be appointed speaker during the assembly session next week.

Vijay Kumar Chaudhary, a JD(U) leader who was the speaker in the previous assembly, was given parliamentary affairs, rural works, rural development, water resources and information and public relations department.

Ashok Choudhary, the JD(U)s state working president, retained building construction besides science and technology, social welfare and minorities affairs while Bijendra Prasad Yadav, a former state unit chief of the JD(U), retained power, prohibition and excise besides getting planning and development, and food and consumer protection.

Mewa Lal Chaudhary, a JD(U) MLA who was inducted in the cabinet for the first time, got education, while Sheela Kumar, a first-time MLA who is only one of two women members in the council of ministers, was given transport department.

VIP chief Mukesh Sahni, who lost his election, was given animal husbandry and fisheries.