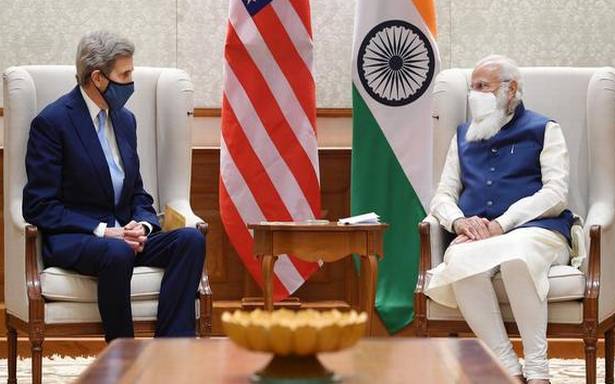 The issue about U.S. commitments had been raised by Finance Minister Nirmala Sitharaman during a meeting with Mr. Kerry this week, as the U.S. envoy pushed for more ambitious targets on cutting emissions.

“[Former President Trump] shot America’s credibility in the head and turned his back on science,” Mr. Kerry said in response to a question from The Hindu at a media roundtable at the end of his visit, referring to the U.S. decision to pull out of the Paris agreement (UNFCCC) on climate change in 2017.

“The United States comes back to the table understanding this obligation, understanding what we need to do, we come back with humility. We come back knowing that the for the last four years we’ve disappointed people,” he added, but pointed out that many U.S. states and cities had stayed the course on climate change mitigation despite Mr. Trump’s pull-out from the agreement.

During his visit, where he met Prime Minister Narendra Modi, as well as the External Affairs Minister, and Ministers of Finance, Environment, Petroleum and renewable energies, Mr. Kerry said he stressed the need to bring forward the commitments for carbon emission cuts from the earlier timeline of 2050 to the next decade, where he said “decisive actions” will be taken.

“Given our complementary strengths, PM Modi and Special Envoy Kerry agreed to collaborate on a 2030 agenda with a focus on a clean and green agenda though enhancing availability of climate finance, building resilient infrastructure, energy storage and green hydrogen,” said MEA spokesperson Arindam Bagchi, when asked about the meetings and whether India had given any specific commitments on emissions.

After their meeting, Finance Minister Nirmala Sitharaman had said she had also stressed on the need for developed countries to “enhance financing flows to developing countries” beyond the promise of $100 billion per year. India has met and even exceeded its Paris agreement pledges on renewable energy, including working towards a target of 450 gigawatts of green energy installed capacity by 2030, but has not yet given commitments on a “net-zero” emissions deadline, as this would hamper development goals.

Mr. Kerry is on a three-nation tour to the UAE, India and Bangladesh, and is expected to reach out to several other countries to raise their commitments on emissions and targets to arrest global warming to no more than 1.5 degrees Celsius, ahead of a special “Earth Day” virtual summit hosted by President Biden for leaders of 40 nations including India, Russia and China on April 22.

“Our challenge in the course of the next month is to get more people engaged in 2020 to 2030. That’s what President Biden is trying to do with the summit that he’s hosting, where he’s asking nations to up their ambition,” Mr. Kerry said, adding that the summit would have “major economies of the world coming together virtually. And every head of state will have an opportunity to say what their plans are going forward. And whether they’re raising the ambition.”

Mr. Kerry said that India had a “key” role in the fight against climate change as the world’s largest democracy, and its values pertaining to the “planet and the environment”.

When asked a specific question about the role of young climate activists, like Bangalore-based Disha Ravi, who was arrested in February this year for sharing a “toolkit” on protests with Swedish activist Greta Thunberg, Mr. Kerry said that he had “great admiration” climate activist groups and young people involved and “welcomed” their activism. He said environmental causes had translated into a voting issue in the U.S. for the first time. He added that countries including the three biggest emitters — China, U.S. and India would rise to the occasion to “get the job done” on countering climate change.