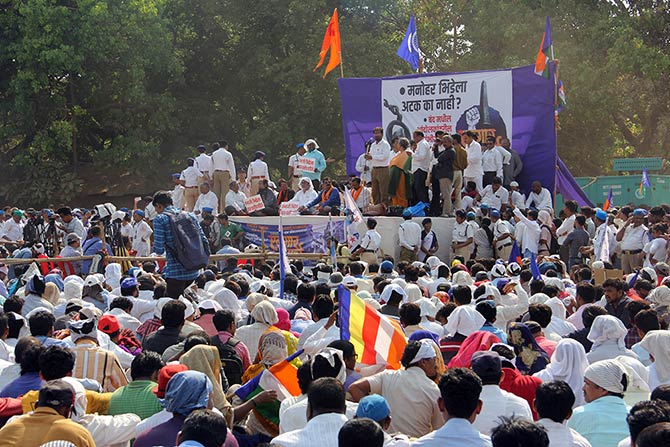 ACP Shivaji Pawar has been asked to file his affidavit by August 15.
Jyoti Punwani reports.

As the hearings in the Bhima Koregaon Commission of Inquiry near their end, the Elgar Parishad has started becoming the focus of the proceedings.

On Friday, the Commission ordered Assistant Commissioner of Police Shivaji Pawar, the investigating officer in the case in which the ‘Bhima Koregaon 16’ have been behind bars since 2018, to file an affidavit before the Commission.

The basic premise of the case, CR 4/2018 Vishrambaug Police Station (Pune), is that speeches made at the Parishad held at Pune on December 31, 2017, were the cause of the violence that took place the next day at Bhima Koregaon, where lakhs of Dalits had gathered to observe the 200th anniversary of the historic battle between the British and the Peshwas. Mahar soldiers among others helped the British defeat the Peshwas.

The case also alleges that the Parishad was organised by people linked with the banned Communist Party of India (Maoist).

All the accused have been charged under the draconian anti-terrorist law UAPA, and except for two, have been denied bail. One of them, 83-year-old Jesuit priest Stan Swamy, died a year ago in a hospital while in custody.

When the proceedings began, witnesses affected by the violence at Bhima Koregaon deposed. The common thread running through their testimonies was that saffron-flag holding mobs had attacked Dalits.

The dispute at village Vadhu Budruk on December 28 2017, between Dalits and Marathas, over Sambhaji Maharaj’s samadhi, also took centre stage. Villagers as well as policemen deposed about how this dispute was settled by the police keeping in mind the massive gathering that was to take place on January 1, 2018.

In all these testimonies, the Elgar Parishad played no role.

However, as police officers from Pune began deposing over the last six months, the Elgar Parishad started becoming the focus of attention.

Ravindra Sengaonkar, who was additional commissioner of police in Pune when the Elgar Parishad took place, became the first officer to link the violence at Bhima Koregaon to the speeches made at the Elgar Parishad. His affidavit also alleged that the Parishad was organised by Maoists.

It was during his deposition in February this year that senior counsel B A Desai made an application asking that ACP Shivaji Pawar be summoned as a witness because it was he, not Sengaonkar, who had investigated CR4/2018. The latter had only been asked to compile material and file an affidavit on behalf of the Pune police, and he had relied on Pawar’s affidavit.

After Sengaonkar’s second round of testimony last month, Desai filed an application that the documents presented in the Supreme Court on behalf of the state of Maharashtra in connection with CR 4/2018 be produced before the Commission, particularly Shivaji Pawar’s affidavit.

These documents were presented when the Supreme Court was hearing a petition filed by historian Romila Thapar and others, asking for the release of Varavara Rao, Arun Ferreira, Sudha Bhardwaj, Gautam Navlakha and Vernon Gonsalves, and an SIT probe into their arrests.

In his application, Desai quoted Justice Dr D Y Chandrachud’s adverse observations on the investigation of the case. ‘Further, the police have selectively disclosed purported details of investigation to the media and television channels. Such acts of investigating officers cast a cloud on the impartiality of the investigation process.’ He had said there was ‘sufficient material’ placed before the Bench ‘on the need to have an independent investigation’.

Justice Chandrachud had given a minority opinion in the case; the majority opinion by the Chief Justice of India Dipak Misra and Justice A M Khanwilkar upheld the investigation.

Shishir Hiray, counsel for the government, opposed Desai’s application, saying that the National Investigation Agency had taken over the Bhima Koregaon case, and the criminal case was not within the purview of the Commission. He also said that the documents asked for could be obtained from the petitioners in the Supreme Court.

Justice J N Patel and Sumit Mullick, the two members of the Commission, rejected the plea for documents, saying they were not concerned with them nor did the Commission have anything to do with the criminal case. However, they felt that Shivaji Pawar would be an important witness and his evidence would help the Commission in answering its terms of reference.

The terms are: 1. The sequence of events at Bhima-Koregaon on January 1, 2018; causes and consequences

2. Whether any individual/group of individuals/organisation were responsible, directly or indirectly

3. Did the Pune district administration and the police prepare to ensure law and order.

5. To recommend short term and long term measures to the district administration and the police to prevent recurrence of such incidents.

Pawar has been asked to file his affidavit by August 15.

The application was made by B A Desai on behalf of Congressmen Sanjay Lakhe Patil and social activist Harshali Potdar, an accused in the Bhima Koregaon case and a witness before the Commission.