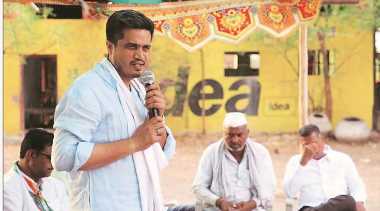 Rohit also claimed that his cousin Parth Pawar, who lost from the Maval Lok Sabha seat and became the first member of the political family to lose an election, didn’t have enough time to campaign. “We have to accept this defeat and introspect where we went wrong… see why our candidates didn’t win, before taking up an aggressive campaign ahead of the assembly elections,’’ says Rohit Pawar, grandnephew of Sharad Pawar, a day after the NCP-Congress alliance won only five of the 48 Lok Sabha seats in Maharashtra. Among the ‘star’ karyakartas of the NCP, Rohit had travelled across the state to campaign for the party’s candidates.

Rohit also claimed that his cousin Parth Pawar, who lost from the Maval Lok Sabha seat and became the first member of the political family to lose an election, didn’t have enough time to campaign.

“He is a newcomer and still polled over five lakh votes. What he did not have was enough time for campaigning,” he said. Rohit said while members of the Pawar family were disappointed about the defeat, they had accepted the people’s verdict. “Ajit Pawar is a seasoned politician and he has also seen defeat after working so hard. They are all fighters and the best way to respond to a defeat is with a win. Now, the focus is on the assembly elections,” he added.

Rohit admitted that the party had expected to win at least 11-12 parliamentary seats. “Our seniors will take up the brainstorming and introspect where we fell short – whether we failed to reach out to the youth in rural and urban areas, to the labourers and farmers,” said Rohit.

He also said social media played a crucial factor as the NCP didn’t use the mechanism as effectively as the BJP had. “We need to strengthen and build a structure to showcase our good work and counter fake news on social media,” added Rohit.

The NCPleader said communication strategies have to be improved and the NCP has to find ways to reach out to people by citing examples of relevant issues, such as the state of the economy.

“(NCP chief) Sharad Pawar has seen a lot of positives and negatives and his specialty is taking the loss in a sporting manner. While he has advised us to think about ways to combat the drought and other issues that affect society, our seniors have also decided to study where we went wrong and then aggressively campaign for the Vidhan Sabha,” said Rohit.

He is among the hopefuls for the party ticket in the assembly segment of Karjat Jhamkhed, but the NCP leader said senior party leaders will take a call on the final list of candidates.

NCP leaders are currently trying to analyse how they fell short in key parliamentary constituencies where they could have done better. In some constituencies, candidates of the Vanchit Bahujan Aghadi and even the Bahujan Samaj Party ate into the vote share of the NCP candidates. For instance, at Buldhana, the VBA candidate, Baliram Siraskar, polled as many as 1.7 lakh candidates while the NCP candidate, Dr Rajendra Shingne, polled 3.8 lakh votes. Shiv Sena leader Prataprao Jadhav won with 5.2 lakh votes.

05/25/2019 India Comments Off on Best way to respond to defeat is with a win: Rohit Pawar
India