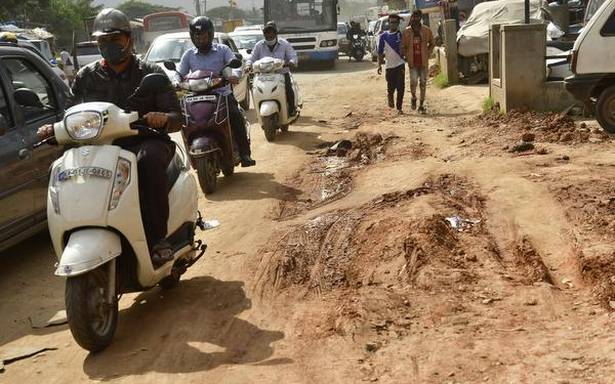 Last year, over ₹20,000 cr. was spent on improving roads; citizens want work orders to be made public so they can be monitored

Last year saw citizens planting saplings and paddy on bad stretches of roads and performing pujas around potholes as rains left the city’s streets in an unmotorable state. But 2021 also exposed chinks in road infrastructure management in the city. Citizen groups and residents’ welfare associations say that fixing accountability is the only way to plug the gaps and it must be top priority in 2022.

In September 2020, Chief Minister Basavaraj Bommai, who also holds charge of Bengaluru Development, revealed that the administration had spent ₹20,060 crore on the city’s roads. Given the bad condition of roads and several pothole-related deaths over the period, the whopping amount raised eyebrows.

Perhaps in an indication as to why such money is spent without results, two weeks ago, the Chief Minister cancelled ₹785.31 crore worth of five-year maintenance tenders of 191 km long 12 high density corridors, when it cost ₹335.17 crore to build them. “I don’t understand why such money is needed for maintenance,” he said.

“The city has 13,000 km of roads and in ₹20,000 crore (average ₹1.53 crore/ km), we could have probably laid concrete roads across the city. The Chief Minister seems to have made a good start by being transparent about the gaps. But it is not enough. Individual officers responsible must be held accountable for these lapses.

Meanwhile, the only systemic way to avoid such corruption and wasteful expenditure is by maintaining road history and making it public, an initiative successive governments have failed to implement,” said N. S. Mukunda of Bengaluru Praja Vedike.

Citizens in outer zones struggling with terrible roads due to relentless digging by agencies have begun demanding road history and work orders given to contractors to be made public. “We are fed up with the poor quality of road work when they are remade after agencies dig them up. We have been demanding work orders to be made public so that citizens can monitor and ensure all specifications of the road are followed by the contractor, but to no avail,” said Jagadish Reddy of Varthur Rising.

However, he alleged that when they insist on specifications, contractors talk about rampant corruption and the struggle to make ends meet. “The Contractors’ Association has written to the Prime Minister alleging a whopping 40% kickback, which is clearly being reflected on the condition of the city’s streets and needs immediate addressal,” Mr. Reddy claimed

Tanveer Pasha, president, Ola Uber Drivers’ and Owners’ Association, has a wish list for the city’s streets for the coming year: better coordination between agencies to avoid repeated digging, pothole filling to be an everyday exercise and do away with concrete roads.

“Half the streets are dug up on any given day making it tough to drive around. It is not hard for us to devise a system such that all agencies install their utilities when the road is dug up once,’ he said. Residents’ groups, especially in outlying areas, have been demanding better coordination for the past two years.