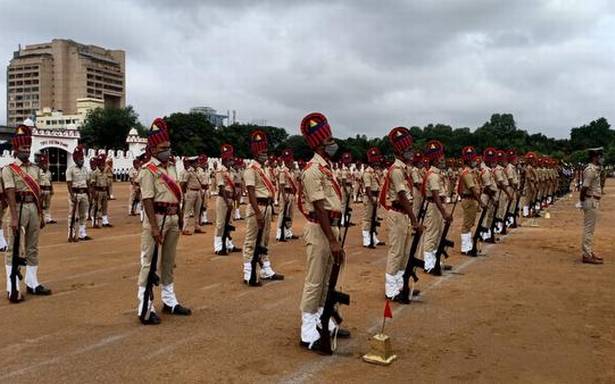 The stage is set for the 75th Independence Day celebrations at Field Marshal Manekshaw Parade Ground in Bengaluru on August 15. Bruhat Bengaluru Mahanagara Palike (BBMP) Chief Commissioner Gaurav Gupta said that a hundred COVID-19 warriors, including healthcare professionals, frontline workers and 25 persons who have recovered from the infectious disease, will participate in the celebrations as special invitees.

A total of 1,000 seats have been earmarked for VVIPs, VIPs and special invitees. There will be no cultural programme. All invitees have to wear masks and comply with social distancing norms. The celebrations will be held in accordance with the Standard Operating Procedure issued by the Centre.

The entire event will be webcast live and also telecast on Doordarshan.

Mr. Gupta said, as part of security measures, 60 CCTV cameras and baggage scanners have been installed. Ambulances and fire tenders will be on standby in case of any emergency.

Police Commissioner Kamal Pant told reporters that 1,500 police personnel would be deployed, as well as 15 platoons of KSRP, 10 platoons of CAR and two commando teams. Anti-demonstration squads will be deployed in and around the ground.

As an additional security measure, vehicular movement will be prohibited from 8.30 a.m. to 10.30 a.m. on Cubbon Road (between B.R.V. Junction and Kamaraj Road Junction). Traffic diversions will be in place during these two hours. Motorists can park their vehicles on Central Street (Anil Kumble Circle to Shivajinagar bus stand), Cubbon Road (CTO Junction to K.R. Road), or M.G. Road (Anil Kumble Circle to Queen’s Statue).