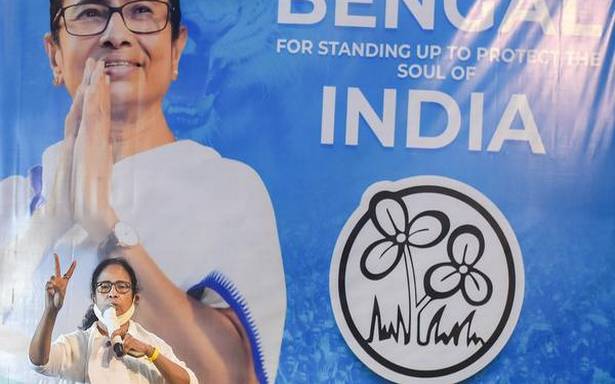 It was hardly a cliffhanger, with the TMC tapping into the distress caused by the Narendra Modi regime

For BJP, a rise and then fall

An almost 10% lead in vote share has translated into a clean sweep, with the TMC registering a two-third plus majority, belying the projections of most opinion and exit polls that it will be a cliffhanger of a contest. The BJP has finished way below the double digit threshold, publicly earmarked by the TMC’s key poll strategist, Prashant Kishor.

While anti-incumbency against the State government was a major factor behind the BJP’s rise in 2019, it is anti-incumbency against the Narendra Modi regime which has kicked in by 2021, leading to a fall in the BJP’s vote share. This is a clear indication of rising discontent against the intense social and economic distress caused by the Modi regime’s mishandling of the COVID-19 pandemic over the past one year. A sizeable proportion of migrant workers who had to journey through hell during last year’s lockdown were from West Bengal. So are those getting infected in the second wave of COVID-19. People have emphatically held the Centre and not the State government to be more responsible for plunging the country into avoidable crises, repeatedly.

The farmers’ movement against the farm laws, rising fuel prices, across-the-board privatisation of public assets, from banks, insurance companies and coal mines to railways — all of it became ammunition against the Centre. Additionally, there was the threat to the citizenship of millions of East Bengal refugees, Dalits and minorities, posed by the NRC-NPR-CAA — or the National Register of Citizens, the National Population Register, the Citizenship (Amendment) Act.

While anger has mounted against the Centre, Ms. Banerjee has managed to win back public support through a combination of grievance redressal, outreach programmes and welfare schemes, which have yielded discernible electoral dividends, mainly among the deprived and marginalised sections.

The BJP’s attempts to brazenly polarise the elections on communal lines have clearly backfired. So has its strategy to capture power in the State by engineering large-scale defections from the TMC. While the TMC may have many skeletons in its cupboard, the BJP’s desperate attempts to grab power in the State by manipulating the central agencies and misusing the pending corruption cases appeared as acts of “invasion”. The fact that the BJP does not have a single Bengali leader who can pose a credible challenge to Ms. Banerjee, added to that perception of “outsiders”.

Frustrating defeat for Kerala BJP president in Konni once again

Therefore, what happened as a reaction to the Prime Minister Narendra Modi-led propaganda overkill in West Bengal, aided by a needlessly prolonged eight-phase election campaign and partisan, often violent interventions by the central forces, was an unprecedented consolidation of the Muslim votes, totalling over one-fourth of the electorate, behind the strongest anti-BJP alternative. The TMC’s convincing victories in hitherto unconquered territories of the Muslim-majority districts of Murshidabad and Malda are pointers. The Hindu vote, in contrast, did not consolidate behind the BJP. Rather, a section of the BJP voters appear to have switched from the BJP to the TMC between 2019 and 2021. The dynamics behind such anti-BJP consolidation needs further examination and analysis.

The emergence of the TMC as the only credible platform for anti-BJP votes to consolidate was also facilitated by the sheer political vacuity underlying the dubious coalition stitched together by the CPI(M) titled “Samyukta Morcha”. It has achieved little besides launching the political career of an Islamic cleric, whose violent remarks against a woman MP of the TMC and the public endorsement of the Paris beheading of 2020, available in the public domain, has only confused the electorate over why the Left Front had to join hands with his ilk. If the erroneous line of allying with the Congress in the 2016 Assembly election dragged the CPI(M) and the Left Front down to the third position in Bengal, it was the extension of that opportunistic, non-programmatic alliance to include non-secular elements such as Abbas Siddiqui, which has decimated the CPI(M)/LF in 2021. The West Bengal Assembly will not have a single Left MLA, for the first time since Independence.

While the Kerala leadership of the CPI(M) has delivered and has therefore been rewarded by the people, the Bengal leadership at Alimuddin Street needs to be held to account for this sad outcome, both within the party and outside. It is the persistent lack of accountability at the top, combined with political opportunism and programmatic incoherence of the CPI(M) leadership which has led to this fiasco of the Left in West Bengal.

The BJP, while defeated in the State, has still captured the Opposition space. In order to relegate the BJP to the margins, where it once belonged in West Bengal, the revival of the Left is essential. That revival, however, is contingent on the much-awaited overhaul within the Left, both within and outside the CPI(M).

Prasenjit Bose is an economist and activist based in Kolkata

05/03/2021 India Comments Off on Bengal’s mandate, a turning point in national politics
India