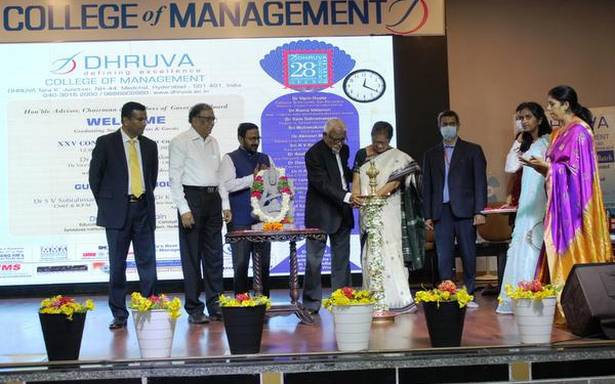 The silver jubilee celebrations of Dhruva College of Management saw an exhibition of Indian traditions in line with the ancient Gurukul style that the college follows, and parents being honoured for the achievements of their children.

Former Deputy Vice-Chancellor of Bolton University, UK, Kondal Reddy Kandadi was the chief guest at the event that also saw the participation of alumni from across the globe. In his convocation address, he shared some important messages with the graduating students and asked them to be resilient towards change and enlightened them that the term ‘perfect job’ is a myth.

College founder-chairman S. Pratap Reddy, in his welcome address, touched upon the values such as humility and love for work which Dhruva has always attempted to ingrain among students. This resonates in the mission statement of Dhruva, that is co-producing leader-managers grounded in intellectual humility and ethical profundity.

Parents of the meritorious students were also felicitated on the occasion and shared how the Dhruva family had made a meaningful impact in their lives. The graduating students received their certificates from the chief guest.

01/08/2022 India Comments Off on Be resilient to change, Dhruva graduates told
India