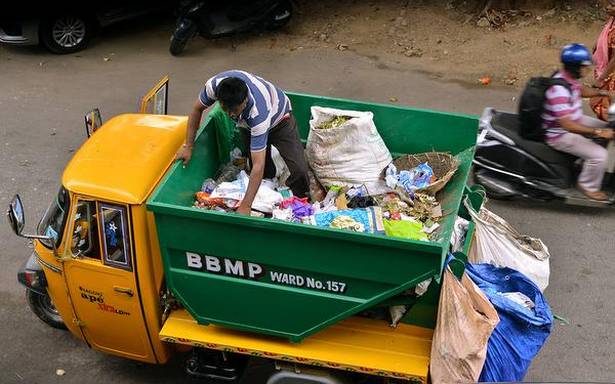 However, experts say the civic body will then be violating National Green Tribunal orders and SWM regulations

It’s been nearly two years since the Bruhat Bengaluru Mahanagara Palike (BBMP) decided to have separate tenders for collection of different streams of waste. Though this is yet to be fully implemented in all the 198 wards, the civic body has already gone back to the drawing board to put in place another system allowing a single service provider to collect all streams of waste.

The new system, which is still being worked out, will not just fix gaps in wet and dry waste collection that currently exist, but also bring in accountability, besides allowing for optimal utilisation of collection vehicles, said senior BBMP officials.

However, waste management experts said that the BBMP’s justifications hold no water. Many argued that if it adopted a single service system, the civic body would be violating not just orders of the National Green Tribunal, but also its own Solid Waste Management bylaws that stress on separate collection and management of different streams of waste.

BBMP Joint Commissioner (SWM) Sarfaraz Khan admitted that there were a lot of gaps in the collection of different streams of waste. With multiple agencies/ service providers involved, skirting responsibility had become an issue.

During a recent review of SWM in the eight zones, it was noticed that there were problems with management of construction debris, animal waste and clearing black spots. “If a single agency is collecting waste, there is accountability and we can fix the responsibility of a second round of collections which will help eliminate black spots,” he said.

Expanding on the problem, Mr. Khan said door-to-door collection of domestic waste takes place between 6.30 a.m. and 11 a.m. After this, the same vehicles can go around for a second round of collection. “We have noticed, especially in commercial areas, that shop owners open around 10 a.m. and dump the waste outside. By this time, the door-to-door collection is completed. This is contributing to an increase in the number of black spots,” he said.

The new tenders that call for separate collection of different streams of waste are implemented in just around 60% of the wards and are yet to be finalised in other wards due to various reasons, including technical issues, no participants in the tender, etc. He added that the existing tenders could be continued, but for some changes in the conditions. The rag-pickers who are managing dry waste collection centres could also be on-boarded by the service provider, he said.

Waste management experts are, however, unconvinced. Sandya Narayanan, member of Solid Waste Management Round Table, termed the move as being politically motivated. “We have shown that with dedicated collection of different streams, it is possible to achieve up to 70% segregation of waste at source. This is reflected in BBMP’s own ranking of zones. Bommanahalli and Yelahanka are at the top because of dedicated collection systems,” she said. On the contrary, in wards where the new tenders are still not in place, waste management is the poorest.

Many are worried that a single provider will allow the BBMP to adopt the Indore model where different streams of waste are collected by the same contractor in vehicles with partitions. Stating that the BBMP was yet to find solutions for collection from commercial establishments that until recently were covered under bulk waste generators, Ms. Narayanan said dual collection was not the issue. “The BBMP is barking up the wrong tree… there are several issues that can be ironed out for the existing system to work in favour of the city,” she added.

11/18/2021 India Comments Off on BBMP to revert to single agency for waste collection?
India